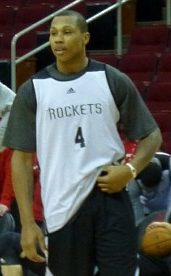 Remember that time you didn’t have any tattoos, and then the next day it seems as though you magically had a whole sleeve? I do, and it was glorious.

Never before have I seen a professional athlete so eager to get tatted after signing a guaranteed deal. In fact I can imagine you sitting in an office getting inked before the ink on you contract had even dried.

But it would be unfair to you to make that the only memory Houston Rockets fans will have of you. We all know that you didn’t exactly have the coolest start to your NBA career, ya know, with that whole flood of gay rumors that surfaced after you sent a shirtless pic to a male Twitter follower. But looking back on the situation, it makes a lot more sense now. OBVIOUSLY, you recognized that you were about to get super tatted, so you wanted the world to have at least one pre-tattoo picture, so you snapped a quick selfie and sent it to a random Twitter follower, right …?

Who cares about the rumors, Greg. We know the truth about your game—basically that you are about as good at dunking as you are bad at making layups. But that doesn’t matter either. True fans know that you didn’t want to stunt on the whole league with your field-goal percentage too high, so you’d roll hard to the basket and go up for a dunk just to decide at the last second you wanted to miss a layup instead. Not to fear, though, your giant catcher’s mitt hands would gobble up any rebound so you could eventually go for a dunk.

And the baby fro too, Greg! Never before has anybody pulled it off as well as you do. Sure, it seems as though Patrick Beverley had insider information about your possible departure so he let his hair grow this season, but his baby fro is nowhere near yours! His makes him look half-hobo, while yours makes you look like half an R&B singer about to drop an album titled “Baby I’ll Make Love to You While You’re on Your ‘Red Nation’…”

But I assume that this is all for the best. After all, you probably already have a tattoo from every worthwhile artist in Houston, so perhaps a change of scenery will be good. Plus, if you’re ever on the verge of getting a bad tattoo somewhere in Chicago, you will more than likely have Lil’ Durk behind you chanting “dis ain’t what you want…”

We’ve all seen how often Aaron Brooks has come back to Houston, so who is to say that Daryl Morey won’t just re-sign you again in 2016, 2018, and 2022? Even if he doesn’t, you’ll always have a special place in the hearts of us Rockets fans, and we can remember you by this.