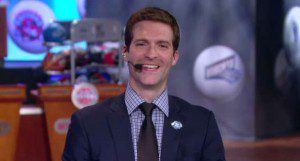 Orlando Magic general manager Rob Hennigan concluded his second season at the franchise’s helm by addressing the media during the team’s exit interviews on Thursday. While his team struggled once again this season, posting a 23-59 record, Hennigan remained in good spirits, ready to work and build a championship-contending team.

The budding star GM has impressed with all of his big moves so far. From trading superstar Dwight Howard, to shipping off fan favorite J.J. Redick, and finally drafting Victor Oladipo second overall in last year’s draft, Hennigan and his brain trust have hit it out of the park. However, his work is far from done, and he realizes that.

From the start of his tenure with the franchise, Hennigan has preached patience and doing things “the right way.” Thursday was very much the same case. When asked if the fans should expect them to look to continue to be focused on the draft, Hennigan said, “More of the same. I think we’ll continue to do our work to identify the best ways to improve the team and the last thing we want to do is skip any steps. I think we’ll be methodical and strategic on how we add to the team, how we improve the team. The draft is certainly one area to do that.” He also said the team would be continue to be active and look to be “opportunistic” in trades and free agency.

He continued by saying that he believes they want to grow “organically” and that they want to grow in a progressive fashion that might not speed things up too much. This is much the status quo for Hennigan, who came from an Oklahoma City Thunder franchise that took its time and built through the draft and now are one of the best and most successful teams in the NBA.

With the team set to have two lottery picks in the upcoming draft, Hennigan knows they must be able to find a balance between young and old. When asked if he would bring in a veteran to balance out an already young roster, Hennigan told reporters “I think you have to be careful. Like we’ve spoken about in the past, I really feel like you need to make sure there’s a balance with the age composition of the roster. We’ll try to stay somewhere in the middle to avoid the extremes.”

Hennigan also said the team would be actively looking in free agency, however it would depend on who’s available and what’s realistic and what’s unrealistic. Last season the team didn’t break the bank in the slightest in free agency, bringing in just two players for just over 3.5 million this season. Those two, big man Jason Maxiell and guard Ronnie Price, have gotten much praise throughout the year and have shown to be good mentors for an extremely young bunch.

The leader of the Magic’s trusty front office also feels as though his team is on pace in their rebuild, and that they’re continuing to move in the right direction. He also expects to see improvement next year, and wants his team to continue to grow and believe in the process.

Hennigan also had praise for his handpicked coach, Jacque Vaughn, who has weathered the tough storm as well as anyone. Hennigan said he’s very pleased with the job that Vaughn has done and that Jacque has been incredibly consistent in his approach and how he treats the guys through the tough times. He also feels as though Vaughn has done a great job of challenging guys and that has had an impact on the players and their growth this season.

Orlando’s lead man, who has been scouring the country all year watching college players, feels as though this is a “good draft.” “We feel like we’ll be able to find players who can help us where we’re selecting and sometimes you can’t say that about a draft. So, overall we feel it’s a good draft.”

He was also asked about the team’s current prized possession, Victor Oladipo. Oladipo, who predominantly played the off guard spot in college, was thrust into the league while trying to learn a new position: point guard. When asked which of the two guard positions he envisions Oladipo playing next season, Hennigan said, “Probably both positions. I think our stance on the infamous question remains the same: he’s a guard. He might play some 1, he might play some 2. We feel like he’s best served as a guard and doing things in the backcourt that we believe he can do.”

Hennigan was then asked if that could change depending on who they got in the draft. “No question. Yeah. Everything’s fluid. We have to be adaptable and we have to be open and willing to evolve as different things come up.”

The final big highlight came when Hennigan was asked if he felt as though his team needed a star to build around. “It’s want versus need. You can go to every team in the league and they’d say ‘sure, we’d love to have a superstar.’ Do you need to have one? I’m not convinced of that. I think that if you can truly build a team that works together and plays for each other and has some depth and identity and plays disciplined, you can be highly competitive in this league. So, we’re open to both avenues.”

Much of this is the status quo with Hennigan, as is expected. He’s got a plan in mind for the team going forward, it’s just a matter of being able to execute everything while doing it the right way. It’s a continued process, and despite the large pile of losses, and some restlessness from the fans, Hennigan is not going to deter from his path and the potential of building a force in Orlando.