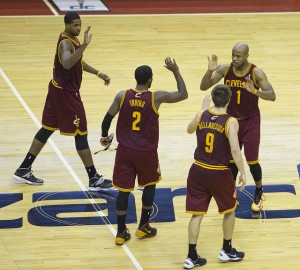 There is always hope in Cleveland when training camp breaks. This is true for all the local teams, as a beginning for one team often signals a merciful end for another.

Nothing has changed. The Cleveland Cavaliers’ season came to a close on Wednesday with a win over the Nets, which was the same way their season started. Too bad that first win was the only time the Cavs were over the .500 mark all year.

The offseason will be a long one, especially if the team cannot get a solid pick in the lottery. It does help that this draft class is extremely deep, and the eighth pick will be better than last year’s No. 1 pick, who will be a fixture in Summer League games in a few months.

The summer will be even more stressful if Kyrie Irving does not sign any type of extension. He has claimed that he is not trying to force his way out of Cleveland, but not signing an extension is evidence to the contrary. No one would blame him if he left if the Cavs have another bad year, but fans in Cleveland hope that neither is the case.

Spencer Hawes is another question, as he will surely test the market, although a Kyrie extension could help land the floor-spacing center. This would give Kyrie far more talent to work with than what was ever given to LeBron James, although LeBron is on another level of stardom.

The low lottery pick means that Cleveland will not be drafting to find their savior, but rather to find another piece to help this team, which is solid on paper, try to make it to the playoffs. In a weak year for the East it is a shame the Cavs could not sneak their way in, if just to give the players the urge to make it back again next year. Constantly missing the postseason with a young team leaves the players unaware of what the postseason is like and that leads to a true lack of understanding of what it takes to contend.

The above paragraphs are nothing but negative, but it is just what seemingly happens at the conclusion of every Cleveland sports season. The Indians started up, but there are still about two months of basketball left that the Cavs are missing. This leads to the annual rooting against the Heat, which is actually not too bad a thing given its regular occurrence.

So I speak for all Cavs fans when I say “Let’s go Bobcats.” (At least until they are swept and the Heat have a new opponent.)