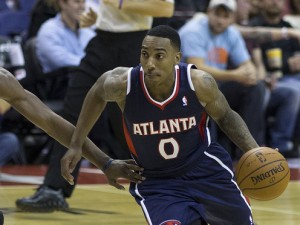 The Atlanta Hawks rolled into Indianapolis and stunned the Indiana Pacers, 101-93 to take Game 1 from the top seed in the Eastern Conference.

During the regular season, the team who won the first quarter won the game and such was the case tonight. The Hawks led 28-22 after the first quarter and found themselves tied at 50 at the end of the first half. However, a 14-0 run during the third quarter helped Atlanta open up a huge lead to hang on for the win.  The Hawks were led by Indiana native, Jeff Teague who had his way all night long with an uninterested Pacers squad. Teague scored 28 points while dishing out five assists. Meanwhile, the most engaged person for the Pacers wasn’t even sporting a jersey. It was that one annoying Indiana fan who somehow managed to be heard throughout the whole game. Paul George and Lance Stephenson had flashes of competitiveness, but nothing that was game-changing. The Hawks basically controlled this game from start to finish as they used their ability to spread the floor and make shots to win the playoff opener. What made this game exceptionally odd was Atlanta’s ability to block shots and rebound with ease throughout the game… things many expected from the Pacers. Seriously, how in the world does Kyle Korver block Roy Hibbert’s shot?

The Hawks are the eighth seed in the playoffs and have the worst record of any playoff team coming in at 38-44, but this is a team who split the season series with the Pacers. Atlanta is also one of the best passing teams in the league and they can shoot the three from all five positions on the floor. Throw in a masterful game from Hawks point guard, Teague and it was the perfect recipe for a win.

Meanwhile, you have a Pacers squad who was hoping for a fresh start as the playoffs began who will now be forced to seriously answer questions they have fought to avoid all season long. Questions such as: What’s wrong with Hibbert? Are they really a number one seed? Why did they trade Danny Granger? While the last question is an afterthought at this point, Indiana obviously must make some adjustments. One of those adjustments might be benching Hibbert in favor of Luis Scola or Evan Turner. Truth be told, the Pacers had more success with their bench than they did with their starters. They are also going to have to find an answer to their Teague trouble which may involve Stephenson. Be that as it may, what’s even more scary for Indiana is the Hawks did not even get solid production from an already thin bench.

The Pacers will get another chance to regroup at home Tuesday, April 22nd at 7PM and make things even, in what now may be the most interesting series of them all.