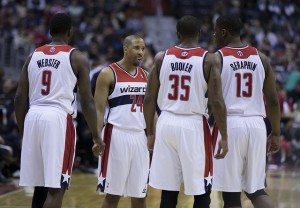 Just three months ago, Andre Miller was home in Denver, working out on his own and waiting for the Nuggets to trade or release him. Golden State, Minnesota and Washington were in the mix, but the Warriors nabbed Steve Blake and the Wizards swooped in with an offer of Jan Vesely to get Miller, a move that allowed him to reach the playoffs for the 10th time in 11 years.

“This was my first option, just looking at the roster, previous history with Martell [Webster], Nene and Al [Harrington],” Miller said. “This was my first choice. It was granted and I’m just happy to get here and try to get comfortable with the situation. It’s been a good experience so far. I’m going to enjoy my time here for as long as they want me here. I’m just happy to be in the playoffs, happy to be able to contribute to this team.”

The Wizards have a player option of the final year of Miller’s contract next season. Miller can be bought out for $2 million of his $4.6 million salary but he has helped solidify the Wizards’ bench and completed the team’s long and frustrating search for a backup to John Wall.

Whereas the Wizards once dreaded when Wall sat, they can now expect Miller to maintain or lead a ignite a rally with one of his patented point guard clinics.

“He has that high IQ and he’s been in the league for a long time,” Beal said. “He knows everything.”

Coach Randy Wittman has credited Miller’s presence with helping Wall understand how to better push the tempo and open up the floor with a pass instead just the dribble. Washington Post

Miller is probably the best back up point guard in the NBA other than Oklahoma City’s Reggie Jackson. He’s a savvy vet with a knowledge to share with the younger guys like Beal and Wall. On the other hand, his antics on and off the court got him unceremoniously traded from the Nuggets.

A set of outbursts with the Wizards’ coaches or management of any would likely bar Miller from having a chance to sign with teams down the road. We are seeing him on his very best behavior but maybe this is a new Miller. The Wizards appear happy to have him and will likely keep his contract if he proves integral in a first round playoff victory versus the Chicago Bulls. – AL