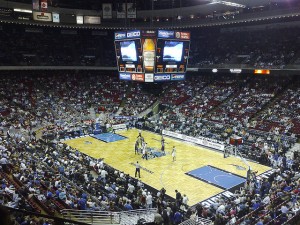 There are multiple ways to become a championship-level contender in the NBA. Some team’s choose to do it mostly through the draft, like the Oklahoma City Thunder or Indiana Pacers, while others try to hit home runs in free agency and trades, like the Miami Heat and Los Angeles Clippers. The Orlando Magic are choosing to go with the former, almost strictly building through the draft while making smart and logical moves in free agency and via trades.

The Magic front office, led by the young and brilliant Rob Hennigan, has been working diligently over the last few years to build a solid foundation for the future. They have that now, and could make a big splash in this year’s NBA Draft with two lottery picks in their possession. They’ve got the hard part of the rebuild out of the way, but next year will be a telling one for them. Do they turn into the Thunder or more like the Sacramento Kings?

The last two years have been bumpy, but the team saw some gradual improvement this season from a handful of their players. By season’s end, almost all of Orlando’s young players had seen their hard work pay off in their play on the court. So, in what ways did these guys improve? What kind of impact did their improvements make on the team, as well as their playing time?