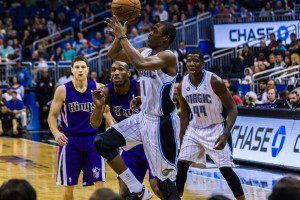 Despite getting inconsistent minutes for much of the season, sharp shooter Doron Lamb made the most of his time this season. He fell behind the eight ball early, thanks to a bad high ankle sprain, but continued to work and found his way back into the rotation by the end of the season. Coach Vaughn praised Lamb for his work ethic on multiple occasions, and gushed about his ability to “always be ready.”

Lamb knows that he has a long way to go in this league, but he can lean on one attribute to keep him on rosters for now: his shooting. After a solid game against the Cleveland Cavaliers late in the season, Lamb told reporters what he must work on, “My ball handling. My defense. I think everything really, just need to get everything better for next year.”

After playing in 28 games before the NBA All-Star break, averaging a mere 2.8 points, on 41.2 percent from the field and 34.1 from three, Lamb saw his scoring and three-point shooting numbers increase. In 25 All-Star games after the break, Lamb put up 4.5 points while shooting 44.9 percent from three. Unfortunately for Lamb, he saw his overall field goal percentage dip to 38.0 percent. He saw some nice performances down the stretch, but will need to continue to improve his consistency across the board.

Lamb has a ways to go in his development, but he showed that he really took a step forward this season. He proved he’s a more than capable defender, both on and off the ball, and can be a deadly three-point shooter when he’s feeling it. Next year will be a big one for him, and many eyes will be on him in his contract year with the Magic.