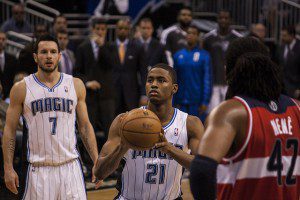 After a solid first month of the season, second-year wing Maurice Harkless hit a wall. He struggled with his shot, and at times struggled to even get on the court for more than a few minutes a game. People began to wonder what was wrong with the St. John’s product.

Then, he flipped a switch and things began to turn the corner. During a west coast road trip in early January, Harkless had a couple of very nice games, which really seemed to give him the confidence that was needed going forward. Harkless really began to get things going, growing from each performance and continually improving on both ends.

After the All-Star break, Harkless saw his numbers go up almost across the board, with only his free-throw shooting taking a slight dip from the season’s first half. He showed more confidence in his shot, helping him to improve his three-point field goal percentage nearly 11 points from his rookie season. He also showed a more aggressive and confident side with the ball in his hands, driving and finishing around the rim with more ease and confidence.

Harkless has said he’ll be participating in the FIBA World Cup of Basketball for Puerto Rico, which will undoubtedly help the athletic wing in his development. He’s still got to find some consistency in his shot and scoring ability, but when he does, Harkless will be a key cog in the machine for Orlando.