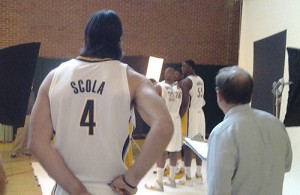 Image courtesy of Thomas Lunay/Baller Mind Frame. Luis Scola shouldered much of the scoring burden with 20 points in 19 minutes for the Indiana Pacers.

It took the Indiana Pacers a half to hit their stride, but they finally found it and won Game 2 101-85 to even the first-round series at a game apiece.

The Hawks actually had a double-digit lead during the first half and led 52-48 at the break. Indiana finally broke the game open in the third quarter, outscoring Atlanta 31-13. Paul George played like Paul George from the first half of the season, pacing Indiana with 27 points and 10 boards. Lance Stephenson only scored seven points but gave the  Pacers the energy they needed to pull away from a tough Hawks squad. However, Indiana owes Luis Scola a game ball. Scola came off the bench and gave the Pacers 20 points and seven boards and really kept them in the game in the first half.

The commentators credited the Pacers defense as being the reason they were able to win in such a convincing fashion. Indy was good defensively but Atlanta still got the shots they wanted … they just were not going in. The Hawks shot 39 percent from the field, making 31-of-79 shots, taking 11 more shots than the Pacers, who shot 52 percent on 36-of-68 shooting. Paul Millsap led Atlanta with 19 points but Jeff Teague was not nearly as hot as he was in Game 1. The Hawks point guard finished with only 14 points, which is not going to be enough if the Hawks are going to remain competitive in this series.

Nonetheless, Atlanta heads back home tied 1-1 with home-court advantage throughout the series in their hands. Now the Hawks have to hope that one of the NBA’s worst home crowds actually comes out to support them. Atlanta is a very lukewarm sports town. They love the Hawks—well, all of their sports teams—when they are winning, but when they’re losing, they really kick them to the curb. The truth is, as talented as the Pacers are in comparison to the Hawks, this is still Atlanta’s series to lose. If they can make the Pacers play fast and actually make shots, coach Mike Budenholzer’s Spurs-like system gives them a great chance even if they are less talented. The Pacers played a great half of basketball but have yet to play a complete game yet, which could be scary either way.