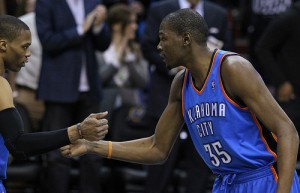 Phil Jackson’s head coaching accomplishments are downplayed by some critics who argue that he would never have won 11 titles without being around at the right time with two different teams comprised of Hall of Fame talents. No shit. That’s not the point. There are several teams throughout NBA history with Hall of Fame talents and no championship rings. Basketball schemes are integral to winning, but managing player egos is just as important if not more so. Teaching Xs and Os are pointless if the best players refuse to accept their role on the court. Everything will fall into place if the best players adhere to the coach’s leadership, but all the coaching schemes fall apart if an important gear turns counterclockwise while the rest turn the opposite direction. Scott Brooks is currently having this problem.

The Oklahoma City Thunder have a high-octane offense that relies on fast breaks and jump shooting while their frenetic defense attempts to overwhelm the opposition with athleticism and speed. They are also capable of scoring efficiently in the half court, but too often rely on isolation attempts for baskets when things don’t come easy. The Thunder are so talented that they get away with ludicrous plays without immediate consequences like this four-point play at the end of regulation of Game 2 against the Grizzlies.

This is detrimental in the short-term if players have not already bought into their roles on the court. Kevin Durant got upset with reporters after being asked about how many three-pointers they took in Game 2 after going 9-of-30 (30%) from behind the arc. He actually hit 5 of out 12 (41.7%) threes, which is not a bad percentage, but it’s not reasonable to assume that will continue for Durant. As he explained, the Thunder took the shots that were open but that’s exactly what the Memphis Grizzlies want them to do.

The law of large numbers states that the more times a trial is repeated, the more likely it is that the trial will result in the expected value. Hot streaks come and go in sports. Jumpers can be good shots but the closer a player gets to the basket, the better he shoots. It’s one of the primary reasons coaches emphasize getting to the paint. Longer shots yield more points but are less efficient, and actually hurt the team when playing elite defenses like the Grizzlies.

In Game 3, the Thunder shot 5-of-28 from three; Durant hit none of his eight three-point attempts. Brooks allows the team to take open shots at their discretion which is fine when the shots go in. When they don’t go in, people accuse Brooks of being an inept coach. The embodiment of this particular issue is Russell Westbrook.

Don’t ever compare Westbrook to a Derrick Rose… There’s a reason Rose in an MVP. pic.twitter.com/N4hTYcE8pr

There are four Grizzlies within a step of the three-point line. Westbrook does not bother to look for one of four reasons:

A) Westbrook feels like he is the guy who needs to take the shot.

C and D are valid concerns but we aren’t talking about Roy Hibbert here (zing!). But seriously, we can be sure that Brooks notices this problem if regular Joes on Twitter can give concrete evidence of Westbrook’s basketball hubris. Everyone has pleaded with Brooks to rein in Westbrook’s unfocused play on offense for the betterment of the team for at least four years. The Thunder would be favorites to win the title this year if Westbrook could focus some of his ferocity into attacking the paint with the intent of kicking it back to teammates.

Westbrook is content with jacking up shots whenever he gets space which is exactly what teams want him to do. He is shooting nearly as many shots as Durant even though Durant is a much more efficient scorer. Brooks has unsuccessfully pleaded for Westbrook  to make more careful decisions. A lot of people make excuses for Westbrook and say that asking him to play different will take away his effectiveness. Consequently, Westbrook is an unreliable player.

I actually believe Durant is the only person who can put Westbrook in check, but it doesn’t matter what I think. Head coaches are the ones to be fired, not players. That’s why head coaches are held responsible when players consistently make mistakes.

Mike Woodson lost his job because the team played horribly after a successful season despite acquiring more talent. Pundits are calling for Frank Vogel’s position because the Pacers are imploding for reasons that seem to have little to do with Xs and Os. Phil Jackson’s last playoff run as a coach was the 2011 Los Angeles Lakers getting swept despite having the core of a team that fought its way to three consecutive NBA Finals. Every coach has their strengths and weaknesses, but an inability to manage egos will make any coach look bad no matter how smart they are. Unfortunately for Scott Brooks, his fate rests in the hands of the one player he can’t trust.