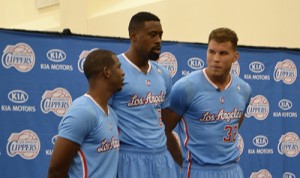 Why doesn’t a professional basketball team own a t-shirt gun?

Picture this. Dad and Mom take their cherubic child to a Los Angeles Clippers game to see his favorite player, Blake Griffin. It’s the kid’s birthday. They pay for their relatively modest tickets in the upper 100s or 200 level seats, brave two hours of Los Angeles event traffic, park and finally nestle themselves into their seats. During a TV timeout, the Clippers Fan Patrol comes out to hype up the crowd. The music is booming and they have t-shirts. The young boy is excited. Dad wants one for his son and Mom looks on earnestly, but if you’ve ever seen a 110-pound cheerleader throw a rolled up t-shirt, you would know it doesn’t travel very far. The Manning-esque wobbly duck flies maybe 10 rows. The boy weeps.

No one is entitled to a t-shirt, but it’s something that small that makes me wonder how such a valuable organization could be so cheap. How could an organization that required unfathomable luck to acquire Blake Griffin and Chris Paul in order to become successful not recognize its fortuitousness and build on itself? The answer is Donald Sterling.

The Clippers are like a mine with gold dust sprinkled around the entrance. There are huge golden nuggets just below the surface, but pick axes, drills, and workers cost money. So, instead of actually utilizing the mine to its fullest potential, they pile up the dust each year and smile contently.

Once upon a time in the recent past, I was an intern for the Los Angeles Clippers; it was not a good experience. During my time there, I learned much about the inner workings of the NBA. I enjoyed and took pride in being part of the rotating cogs that kept the team running smoothly, but what became incredibly clear to me after years of hearing rumors about how the Clippers were run, was that the Clippers were most definitely not the Lakers.

The legacy of winning, superstars and celebrities were the things that I thought made the Lakers different, but after roughly six months working for free, I began to notice the other more subtle differences that began to creep up.

As with any unpaid internship, you quickly recognize that you are being taken advantage of. I did. What made the Clippers different was the small things.

Clippers interns wear blue intern shirts, while the Lakers interns wear suits. Professional dignity. The Lakers are concerned about the quality of product and image, not keeping people in line. It was a small organizational choice that could easily be overlooked if you aren’t aware of how deeply ingrained the Clippers culture of potential squelching adequacy lies.

When  a supervisor tells an unpaid intern that they don’t have funds to reimburse you for your gas when you deliver thousands of dollars worth of tickets and passes to ESPN and the Minnesota Timberwolves across Los Angeles, know it’s an outright lie. Then you wonder why your department is underfunded. Then you come to the conclusion that your supervisor is probably underpaid, and her supervisor is underpaid, and after that long trip down that road you come back to Donald Sterling.

Sterling is the biggest impediment to the Clippers winning a championship. Blake Griffin seemed to be doomed for a career of “almost good enough,” but unexpected success has almost forced the team to improve organizationally (Doc Rivers) and this latest incident might push the Clippers over the top.

Donald Sterling’s racial comments fit right along with his history of impediment frugality. We knew Sterling was cheap, just like we knew he was a racist, but this latest episode in the Sterling saga appears to be an opportunity to wrest this diamond in the rough franchise from Sterling’s apathetic paternalism.

He’s never cared about his team. Even after being gifted a successful squad at his advanced age, he’s managed to show that he isn’t even appreciative of the NBA itself.  While Sterling’s conversation was undoubtedly in private, to disrespect Magic Johnson, after incidents with Elgin Baylor and Baron Davis, is akin to spitting on the NBA logo itself.

Will the NBA do more than what is adequate? Or will a well-placed statement that makes it seem like they’re doing something, but not really, suffice? That would be quite appropriate when dealing with Los Angeles’ other team.

Mark Cuban celebrating with his team after Vince Carter’s game-winning three on Saturday was a thing of beauty. His players must love playing for him. I wonder how the Clippers feel about playing for their owner. I know I didn’t enjoy my time there. Maybe if Magic Johnson actually buys the Clippers, he can finally bring some class to an organization that’s been missing it for so long.