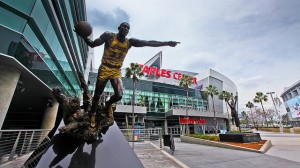 For all these despicable revelations tumbling out of the hateful heart of Donald Sterling, there promises construction of a roadmap to redemption for the Los Angeles Clippers and the NBA. There’s a way out for the most hated man in Los Angeles now, a way out for the commissioner’s office and the owners responsible for long legitimizing and harboring a bigot and slumlord.

To bail themselves out of the NBA’s worst crisis of credibility since the Tim Donaghy officiating scandal, the easy part for the NBA will be enlisting the eagerness and financial muscle of Magic Johnson and Mark Walter of the Guggenheim Partners – owners of the Los Angeles Dodgers.

For commissioner Adam Silver, the chance to turn the Clippers over to Magic Johnson and his partners is the best possible of solutions. Exit Sterling, enter Magic. It would be the greatest trade in sports ownership history since, well, Magic for the McCourts, with the Dodgers. Yahoo Sports

For the first time in a long time, black athletes and sports businessmen will be going out of their way to stand united on a particular issue. A variety of variables have previously kept athletes such as Michael Jordan from staying away from social issues, but this leaked tape could be the catalyst that changes everything about that reality.

It’s hard to say how this will play out but let’s hope it is lasting and impactful. – AL