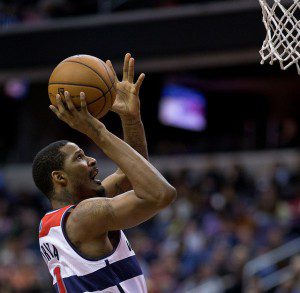 Image courtesy of Keith Allison/Flickr.
Trevor Ariza scored a career-playoff high 30 points to lead the charge for the Washington Wizards over the Chicago Bulls in Game 4.

With Nene suspended after Game 3 and the Chicago Bulls winning the previous meeting, the Washington Wizards were put up against a wall with only two possible games left on their home turf. The “Whiz kids” needed to respond  early if they didn’t want Chicago’s momentum to carry over into Game 4. Who would rise to the occasion in the place of Nene…Marcin Gortat? Tevor Booker? Drew Gooden?

The Washington Wizards started off hot opening up an early 14-0 lead against the Bulls, making it clear that even with Nene out they still got game. Washington came out firing and at one point led by as many as 23, handling the Chicago defense with ease. Trevor Ariza scored a career-playoff high with 30 points and made 6 of 10 three-pointers. John Wall chipped in 15 points and 10 assists. On the other end, Taj Gibson lead the Bulls with a career-high 32 points. Booker, who replaced Nene played solid minutes scoring 8 points, grabbing 9 rebounds, and swatting 3 blocks. His energy was much needed in a physical game without the “X-Factor” Nene.

“I think we are a smart enough group to understand that when one of your pieces goes down you have to find ways and wills to win,” said Ariza. The Bulls threatened a late comeback, but would eventually fall short as Washington went on to win 98-89. “It’s just disappointing,” Chicago guard Kirk Hinrich said, “We thought the mistakes we were making, we could correct them.” As Washington heads into Game 5 with a 3-1 lead the Bulls seem to be left scratching their heads for an answer.

Game 5 is this Tuesday in Chicago at 8pm. Tune to and watch this exciting storyline.