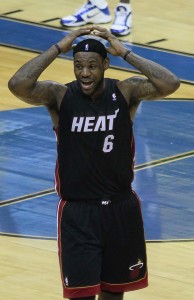 LeBron James has been battling Kevin Durant for MVP votes this season, but he came to the Oklahoma City star’s defense Friday over a newspaper headline that called Durant “Mr. Unreliable.” The headline ran after the league’s leading scorer struggled late in a Game 5 home loss to the Memphis Grizzlies.

James was asked after Friday’s Heat practice for his thoughts on the headline controversy.

“I don’t think that was a great idea,” James said. “Not your hometown paper. Not with a team you helped to get to the NBA Finals, [and will] potentially be an MVP, a multiple scoring champ and have led his team to a place it’s never been before.”

James then paused briefly before referring to Durant’s potential decision to play elsewhere after his contract ends with the Thunder following the 2015-16 season.

“K.D.’s got to be a free agent at some point,” said James, who rocked the league when he left the Cleveland Cavaliers after seven seasons to sign with Miami as a free agent in 2010. ESPN

LeBron James and other athletes are looking at this only from their point of view. James has ripped by the national media several times throughout his career; he accepts and expects that to happen, but he seems bothered by the idea of any city’s local media criticizing players. That’s not fair to the writers and reporters of the local beat, and does not give the local media an opportunity to give an honest opinion.

Unlike the national media that only focuses on the team when a headline arrives, the local media is always focused on their particular team. They notice things others would not and have an investment in the team’s performance. Obviously, no one in Oklahoma City wants Durant to leave, but that headline was nothing compared to the national criticism to come if the Thunder lost Game 6 to the Grizzlies. Besides, no one would have blinked if this headline had been about Russell Westbrook.

Let’s close with a few tweets from the insightful Jemele Hill.

Some have it twisted. “Hometown” newspaper doesn’t and shouldn’t mean “homer” newspaper.

And if a newspaper headline drives drive away Durant, he just didn’t want to be there.

And if the New York Daily News had that headline, no one would blink. Because it’s a small town, people think they should be kiss ups.