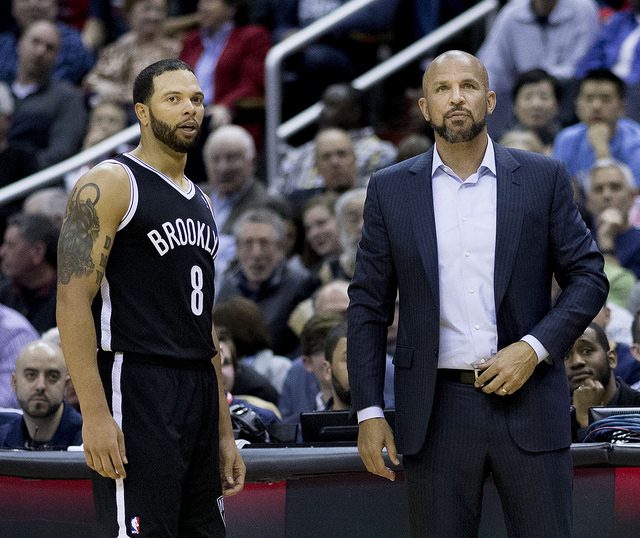 The Brooklyn Nets have forced Game 7 in their series versus the Toronto Raptors behind a throwback performance from Deron Williams, the team’s ability to get the Raptors into foul trouble through their heavy use of Horns actions and its counters, and stifling the head of the snake that is Kyle Lowry. The former has been something that they’ve done well in spurts, but it made a key difference in the first quarter when the Nets made a concerted effort to run those type of actions through Kevin Garnett and Paul Pierce at the high post. Their first possession of Game 6 offensively was just a simple action where KG and Pierce were stationed in the elbow while Joe Johnson cut to the rim:

The Nets ran the same play again for their next possession, but Johnson instead of cutting to the rim, used the screens from KG and Williams and launched a floater.

Toronto, whenever the Nets have run this for Johnson, have had little to no shot guarding it, and the Nets exploited it. The Nets got a lot of mileage from Johnson post-ups of varying varieties, whether it was Johnson simply doing iso post-ups or Johnson off the ball making cuts to the paint area and planting his flag in the paint. The Nets overall had a +16 point in the paint advantage in Game 6 and got 34 points in the first quarter through the Nets continuously attacking the Raptors whenever they had the chance. It was a very smart game plan, especially to wear out someone like Lowry, who clearly isn’t 100 percent, and DeMar DeRozan who had an efficient first quarter, though the shots he had to take made you think it wasn’t going to be sustainable.

(Speaking of DeMar, from watching him operate in the first quarter, you can clearly tell that he’s in some sort of way modeled his game after Kobe Bryant. It’s very interesting to see it, especially with the way he jab steps and launches corner threes.)

The Raptors meanwhile had issues with establishing any sort of pick and roll game in part because of the pressure the Nets put on the ball handlers. The Nets, in general, have put hard pressure on the pick and roll whenever DeRozan or Lowry have been the ball handler, but the Raps had success turning the corner and attacking the rim. The Nets have very little rim protection in their lineup so once teams can get passed the big man hedging and get around the long arms involved, there’s room for massive damage to their defense. The Raps couldn’t do that though and with Terrence Ross being effectively neutered in this series, the Nets have been able to set shop. The starting lineup of Jonas Valanciunas/Amir Johnson/Ross/DeRozan/Lowry has a NetRtg of -21.3, a horrific number, while their second and third most used lineups have been much better. Ross has been invisible for the entire series despite getting mostly clean looks, and the JV/Johnson big man combo has been awful in this series.

Another trend with Toronto has been tracking the games where the Raptors tend towards more isolation heavy basketball: 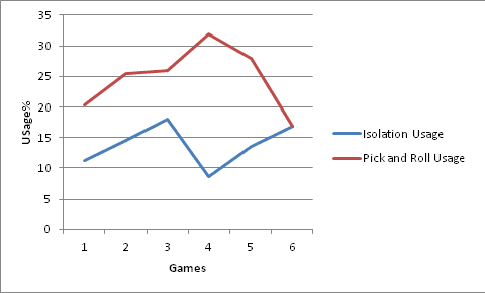 Some of this is a bit misleading seeing as Synergy designates pick and roll usage as possessions that end in a shot, turnover or a foul, but it’s a decent correlation as to how Toronto has done in this series. There’s nothing wrong with having some possessions ending in isolation scenarios. Over the course of 48 minutes, you won’t have an offense that won’t find itself in having to chuck up a couple of bad shots one on one. Plus, DeRozan has caused some damage as an isolation player in this series, especially during the early parts of Game 6. One thing that Toronto could do is run some drag screens and quick hitting actions in semi-transition, something that Kyle Lowry is great at doing. Deron Williams himself caused major damage on the Raps in the first half playing with pace.

Game 7 is tomorrow in the T-Dot, where an entire nation will be watching with a collective nervousness that’s become synonymous with Toronto sports. Each team has shown their warts, and each team have shown why they’ve had success in this series. Brooklyn have had their issues guarding the pick and roll, especially when it involves drag screens that allow for Johnson to roll to the rim successfully. Toronto meanwhile have had no answer for Iso-Joe and Game 4 is seeming to be more of an aberration. Game 7 is where narratives are made and mythical heroes are etched in stone. More than anything, you don’t want to be the team who has to watch EJ, Kenny, Shaq and Charles rev up the boat and say “Gone Fishin.”