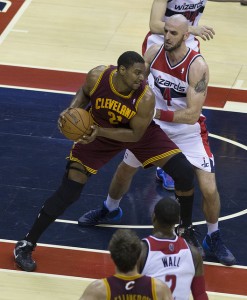 The Indiana Pacers announced Wednesday center Andrew Bynum will miss the remainder of the NBA Playoffs and will not be with the team.

“We want to thank Andrew and our medical staff for trying to get the issues with his knee resolved,” said Pacers President of Basketball Operations Larry Bird. “We wish him the best in the future.” NBA

When Bynum was released by the Chicago Bulls (it’s really hard to even remember that happened, right?), I wrote that any team that acquired him would suffer a slump.

Contenders need to fill spots with budget-friendly, hungry players who will play their role and be healthy enough to play when needed. That’s what the Heat did last season when they signed Chris Andersen, and they would certainly would not have won the ring without him.

I implore you all, friends, fans, countrymen, and general managers to leave Andrew Bynum alone. What potential he had has faded away. Don’t waste millions of dollars and locker room chemistry to prove what’s already known.

So just imagine how tickled my funny bones were when reports came out that Roy Hibbert’s struggles were the result of Bynum’s presence on the Pacers’ roster. Maybe Hibbert had reason to be concerned.

Those two games account for Bynum’s entire career as a Pacer but maybe the production was too much of a threat for Hibbert. As CBS Sports’ Matt Moore noted, Hibbert totaled 15 rebounds through his first eight playoff games, shot 36 percent from the field and earned a 2.8 PER – porous by any standard, let alone a current All-Star. The first game after Bynum was released, Hibbert went for 28 points, 9 rebounds, and 2 blocks. Weird coincidence. We don’t know that Bynum’s absence played a role in that sudden burst of production, but that’s what most people will assume.

Either way, Bynum’s career is likely over. He probably pissed off enough people with the Lakers, Sixers, and Pacers that the league has collectively realized he’s been able to siphon funds from their wallets without doing work for four years. I would love for someone else to give him another contract so I can use one more excuse to use stupid gifs like this one.