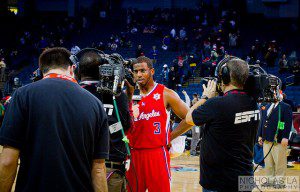 The Los Angeles Clippers rallied back to win a close contest against the Oklahoma City Thunder in Game 4, winning 101-99. The comeback Clips fought back late to win a game that the Thunder controlled throughout. All the Clips saw at the six minute mark in the fourth quarter were opportunities, and they capitalized on them.

Chris Paul came up big, leading his team with 23 points, 10 assists, five rebounds and four steals, doing just about everything to keep his team in the game. Blake Griffin had a solid night as well, contributing 25 points and nine boards. The two boosters off the bench for the Clips were Jamal Crawford and Darren Collinson. Crawford came up with 18 points, five rebounds and three assists, while Collinson sparked up tonight with 18 points and seven rebounds. Although Collinson had trouble stopping Westbrook, he made up for it on the offensive end in the final quarter, where he scored 10 points. DeAndre Jordan came up big on the glass with 14 boards, helping the Clippers outrebound the Thunder, 45-43, which is the first time the Thunder were outrebounded in their last 11 NBA Playoff games.

MVP Kevin Durant had a phenomenal game with 40 points, seven rebounds, 3 dimes and a pair of steals. Durantula did just about everything in Game 4, but it just didn’t seem to be enough. Westbrook came up with 27 points, eight assists and six rebounds. The dynamic duo of Durant and Westbrook led the Thunder to a 22-point lead early in the game, but the Clippers somehow found a way to contain the superstars. CP3 challenged Durant on the defensive end, and although he gave up plenty of height and length, he found some success in disturbing Durant’s game down the stretch.

If anything can be said about the Clippers in this year’s NBA postseason, it’s this: they’re always dangerous. This was their 14th comeback of the season where they had to climb out of a double-digit deficit. Last round, they rallied back after trailing by 12 points in Game 7 against the Golden State Warriors. “When there’s a will, there’s a way” isn’t just a throwaway cliché statement to Doc Rivers and the Clippers. The Clips didn’t just steal away a game from the Thunder, they might have chipped off a piece of their confidence too.

This series is going blow-for-blow so far, and the last man standing will be determined in the next couple of games. The Thunder and Clippers face off again in Game 5 at the Chesapeake Energy Arena in Oklahoma City on Tuesday, May 13.