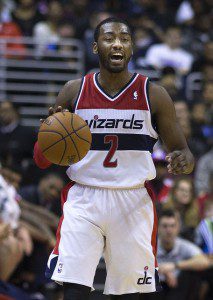 John Wall says Saturday he ”could barely see” in the third quarter of Washington’s 85-63 loss to Indiana on Friday night. That gave the Pacers a 2-1 lead in their best-of-seven Eastern Conference semifinal.

He was poked in the eye on a drive to the basket early in the second half. Teammate Bradley Beal says Wall ”said a few times it was bothering him and that he couldn’t really see.”

That’s a pretty scary injury that was barely mentioned during the broadcast. Thankfully Wall has quickly recovered and played heavy minutes in Game 4.

Wall has performed under par in each game of this playoff series versus the Indiana Pacers. He hasn’t scored more than 15 points in the series yet, and is not doing a great job initiating the offense. If Wall is the truly a star point guard, he has to show up for the series or the Wizards have no chance to win. – AL