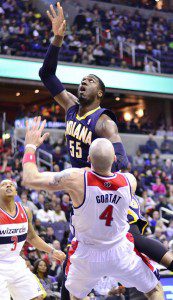 The Indiana Pacers rallied from 17 down to beat the Washington Wizards 95-92 and take a commanding 3-1 series lead.

Growing pains suck and the Washington Wizards are experiencing their share right now against the Indiana Pacers. After getting smoked in Game 3, the Wizards got off to a strong start and lead 55-38 at the half. Then the Pacers went on their usual third quarter run and used experience to beat a Wizards team who simply couldn’t seal the deal. Now Washington finds themselves down 3-1 in a series they could have easily been tied 2-2.

This game was the perfect pace for the Wizards. They were able to run, get up and down the floor and find easy shots. They trailed by one after the first quarter and outscored the Pacers 29-11 in the second and seemed well on their way to a win. But once again, the Wiz went cold in the second half. They also struggled to contain Paul George, who led all scorers with 39 points. George was also 7-10 from behind the three point line. PG really neutralized all the hard work Washington put in. The Wizards got balanced scoring, shot the ball moderately well and even hit 78% of their free throws.

Despite losing the lead, the Wizards still had a chance to pull out the win but once again they could not hit the big shots down the stretch, just like in Game 2. Blowing leads was something the Wizards did 11 times during the regular season and it reared it’s ugly head in Game 4. Even more frustrating for the Wizards is the fact that the Pacers really have not stopped them from scoring. Although George hounded Bradley Beal and frustrated him at times, Beal still put up 20 points. The Wizards have been able to get shots, they just haven’t been able to make them.

The Pacers will now look to close out the Wizards in Game 5, or at the very least look to avoid becoming the ninth team to blow a 3-1 series lead.

Game 5 will be Tuesday at 7 PM in Indiana.