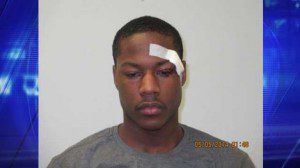 Suns guard Archie Goodwin was arrested outside an Arkansas skating rink earlier this month and charged with disorderly conduct and refusal to submit to arrest.

Goodwin, 19, was leaving the Arkansas Skatium, an ice and roller rink in his hometown of Little Rock, on May 4 when the incident occurred at approximately 11 p.m., according to Arkansas State Police public information officer Bill Sadler.

A state trooper witnessed Goodwin cursing and “exhibiting aggressive gestures” toward another person while exiting the building and the trooper reported telling Goodwin twice to stop cursing, Sadler said.

Goodwin was taken into custody, but the trooper said Goodwin tried to break away from the trooper’s hold during the arrest, according to Sadler. Goodwin then was booked into a Sherwood, Ark., jail. Arizona Republic

This does not sound good but it’s always best to wait until the facts come out before making character judgments. Goodwin’s career could be in jeopardy. Professional athletes are often given many chances before anyone gives up on them. Goodwin has not produced on the court enough to receive much leniency from the Suns organization or fans of the team.

Hopefully this is less serious than it appears at first glance. – AL