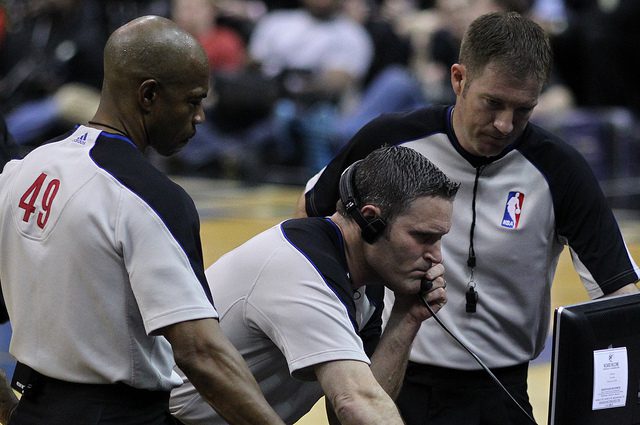 All calls are not created equal.

As much as people would like to believe that they are, that poor calls in the first half balance out egregious calls down the stretch of a close game, they simply do not.

Look, officiating a professional basketball game is difficult. Huge athletes, the best in the world, are zipping up and down the floor at a breakneck pace, and most of them are trying to trick the officials on top of it all. Referees are human, and thus capable of error. However, bad calls early in the game are no excuse or negation for bad calls made late.

If an official incorrectly calls a foul in the first quarter, both the referee and the negatively-effected team (let’s call them Team A) have three quarters – 36 or more minutes of basketball – to make it up. The two points Team A surrendered at the line because of the foul call may impact some aspect of its strategy from that point on, and over the next 36 minutes, let’s say, that adjustment may recover those two points.

Or maybe, even more likely though refs would never admit it, officials have 36 minutes to make up for the missed call. Maybe over the next few minutes, there’s a questionable call that the refs give to Team A, to atone for giving Team B that questionable foul and two points earlier. It’s unwritten, but anyone who watches sports, particularly a fluid game like basketball, will tell you that make-up calls exist.

So over that 36-minute span – ample time – the refs or Team A, or a combination of both, have made up for the imbalance that first-quarter miscue caused.

At the end of a game, however, there is far less time to make up for a missed call, shrinking the margin of error smaller and smaller as each precious second dwindles away.

Some will argue that calls late in the game draw more attention and ire simply because they’re closest in proximity to the final outcome and freshest in viewers’ minds, but ultimately have the same impact as the same call had in the game’s first quarter.

But, because there is exponentially less time for any party to make-up for a call in the last seconds of a game, calls in the closing moments have far more weight than calls early on.

This dilemma played out Tuesday, in Game 5 of the Western Conference Semifinal series between the Oklahoma City Thunder and the Los Angeles Clippers. Down 102-104, Reggie Jackson drove to the basket before a slap from Matt Barnes sent the ball out of his hands. The officials missed Barnes’ slap of Jackson’s hand – a clear foul – instead saying he knocked the ball out of bounds. Who it went off of was up for some debate live. Fouls are not reviewable in the NBA, but, in the final two minutes of the fourth quarter, questions of possession are. So off to deliberate the officials went.

While the replay clearly showed the ball last touching Jackson – who pushed it away while flailing his arms in an attempt to draw the foul – the officials inexplicably deemed it was Oklahoma City ball. According to Chris Paul, Tony Brothers went so far as to say that the replay showed his crew that it was off of the Clippers. Complicating matters further, in a statement after the game, Brothers reportedly said the replay was inconclusive. Which was it?

The Clippers were irate. They still had the lead, but the game was hanging in the balance and tipping toward the Thunder thanks to an artificial nudge.

On the ensuing inbound play, Russell Westbrook received the ball, ignored all logic, and fired up a contested three, which just grazed the left of the rim. Ballgame.

Or not. Chris Paul, who defended the shot, was whistled for a foul, sending Westbrook to the line for three free-throws, which would take the lead and win the game, 105-104.

Had the referees made the correct call in the first place, sending Jackson to the charity stripe, the game could have been decided by the players, with one final Clippers possession, or in overtime. (Yes, Los Angeles got a final chance in regulation Tuesday, but the cards were stacked against them. They trailed by one, when, after inconsistent foul calls, they should have been tied up or even in the lead.)

Instead, Game 5 of a series that may produce the NBA champions was decided by referees’ calls in the final seconds, and calls that were inconsistent at that. They missed one Clippers foul, made an incorrect call with the help of replay, then called the Clippers for a similar foul seconds later.

Because there was less than seven seconds left after the dust of this explosively tense sequence settled, neither the refs nor the Clippers had an appropriate amount of time to make up for the blown call(s). There were surely inconsistent foul calls in the first quarter or two of Tuesday night’s game, but because there was only seconds left after that farce down the stretch, those late calls mattered more, bottom line.

The weight of the inconsistent officiating down the stretch dragged the scales in Oklahoma City’s favor far more than any similar calls could have done earlier in the game, with plenty of time to adjust.

The decisions, explanations and outcome at the end of Tuesday’s game were all unbalanced, and proof that, despite our utopian desires for equilibrium, all calls are not created equal.