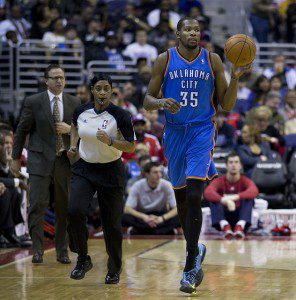 There aren’t too many things that hurt as much as losing a ball game by a single point. The Oklahoma City Thunder won by a single dagger against the Los Angeles Clippers in Game 5, with the final score being 105-104. The heartbreaking loss puts the Thunder up 3-2 in this amazing NBA playoff series.

Russell Westbrook took the wheel for the Thunder, putting up 38 points, along with 6 assists, and 5 rebounds. Westrbook  exploded in the third quarter, scoring 14 points to keep the Thunder on the heels of the Clips. The Clippers rugged defense frustrated Kevin Durant, as he only made 6 out of his 22 attempts from the field; however, he did manage to go 12 for 12 from the charity stripe, chipping in a healthy 27 points on the evening.

Blake Griffin led the Clippers with 24 points in the game, along with 17 rebounds, and 3 assists. Chris Paul was held to 17 points, hitting only 6 of 16 from the floor, but he also dished out 14 dimes. J.J. Redick and Matt Barnes chipped in 16 points each; however, DeAndre Jordan was a non-factor as he got into foul-trouble early.  The Clips had difficulties protecting the ball, which is evident in their 17 turnovers.

It was battle to the bitter end, but the Clippers fell apart just enough for the Thunder to squeeze by. Sure there are those that say the refs made some questionable calls, and the Clips may or may not have gotten robbed, but all is already said and done. Anyone who’s watched the Fast and Furious knows that winning is winning.

These teams are evenly matched, and this series is arguably the most entertaining matchup of the second round in the playoffs. It may all end for the Clippers on their home turf in Game 6 or the series may follow its pattern in going blow for blow. The Clippers really need to be fully focused, and Chris Paul needs to be CP3; they could also use the DeAndre Jordan from the first round.

It’s win or go home time for the Clippers in Game 6, tipping off on Thursday, May 15.