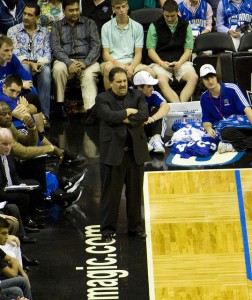 Stan Van Gundy, the former Miami Heat and Orlando Magic coach, has reached an agreement with the Pistons to take over as both coach and head of basketball operations, a person with firsthand knowledge of the Pistons’ plans told the Detroit Free Press. The person spoke on the condition of anonymity because the contract has not been finalized, though it could be by the end of the week.

This is a good hire but it’s unclear what this means for the future of the Pistons. As head of basketball operations, Van Gundy can make whatever changes to the roster he wants. I have no sources on this yet it’s easy to surmise that Van Gundy was not going to take the job of a rebuilding team without full control of how the team would proceed with its future.

Currently, the Pistons have few parts that match.  Greg Monroe and Andre Drummond are the cornerstones of the team because of their potential, age and high motors. Everyone else is expendable including Josh Smith, the man of 1000 errors.

The Pistons are expected to announce the hire later this week. We can expect Van Gundy to give insight on his vision for the team at the time. – AL