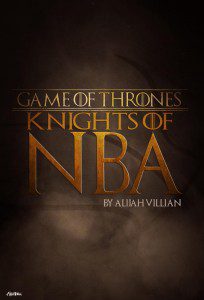 All images courtesy of Alijah Villian.

The lands on Westoros and the NBA are not all that dissimilar. Sometimes those that looks most powerful are really having their strings pulled from afar. And sometimes just when you think you know where the story is going next…BAM…the Pacer’s aren’t that good anymore (for example).

When I first delved into the world of assigning NBA personalities appropriate counterparts in the realm of seven kingdoms, I was unaware of a similar project being done by visual artist Alijah Villian. He calls this project, “The NBA Knights.”

After looking through his work, I was inspired to assign a “Game of Thrones” character to each of his illustrations and he was kind enough to allow BMF to use them for this piece and even granted us an interview that will be running soon.

In the original piece, I dubbed Michael Jordan as Robert Baratheon and Pat Riley as Tywin Lannister. Neither are in this piece because there are no visuals for them. The rest have illustrations and so are repeated here with additional insights into my thinking…if we want to call it that.

(Note: I have not read the books and do not intend to. The following contains spoilers from the first three seasons and I matched the characters based on what I’ve seen from them in those seasons without much thought of where character arcs might be going. If you think you could make a better list, by all means submit one in the comments section!)