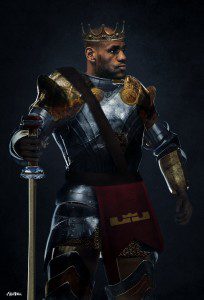 When I was in high school, I played the french horn in the band, I was involved in student government, and I played sports. Back then it felt — as it sometimes does now — that I had to traverse through different worlds on a daily basis.

While we tend to stop using words like “nerd” or “jock” after high school, the realms of art, intellectualism and athleticism have often felt at odds when really they are all a part of the same glorious and mystifying puzzle.

When I first came across the artwork of Alijah Villian, it was a “eureka” moment. His NBA Knights project blends different worlds into a beautiful adaptation of the complexities of life. Art and sport, fantasy and reality, heroes of old and new come together in a way that shows us something about ourselves; that we are not as different from each other — or our predecessors who wore armor — as we might think.

Alijah was kind enough let us use some of his pictures for a NBA/Game of Thrones crossover piece and also answer some questions. Here is that interview:

For our readers who are unfamiliar with your work, can you give us a quick bio/origin story? (Feel free to not be that quick.)

Fo sho, I am a digital artist whatever the hell that is. My artwork is mostly about characters that I made up when I was a kid, when I was younger I had a large fan base of bullies and non believers. So, after I caught a tantrum in my class my teacher forced me to do a theater play (The Nutcracker) so I incidentally stumbled on art because of that. . Theater sort of teaches you that everything in this world is corny and the only thing that matters is not caring about what others think. I eventually stopped acting and started a branding business and then later a photography/film business meshing the two worlds has really helped my artwork evolve.

My main aim is to tell stories of strong characters. I love doing series of images, I guess its the way I think for some reason – when I start imagining a project it usually comes out as a bunch of shots like a movie.

Where does my work come from? That’s always a hard question – but I think it’s a compound of my imagination and the dreams that I have but can’t really remember so I try to live them which results in confusion with reality and whatever comes of that is what I put on the canvas. My artwork has a very YOLO approach it’s primarily driven by the rage to be different and go against what people have told me I can’t do my entire life. If there is a term I use to describe it it would be Dedicated Passion.

Our paths originally crossed over what some might call an unusual mutual interest; NBA/Game of Thrones crossovers. What events led to the Imagineering of the NBA Knights project?

Haha yeah it was kind of strange coming about, of the project. In February I did a personal project for Black History Month called Black Superheroes Reimagined it was like a simple idea because it was so many people talking at the time about more black people being represented in movies and Hollywood. So I took some posters of popular superhero movies and replaced them with all black cast. After I put it up, I was like whatever, what’s next. Then all of sudden I got all kinds of messages I was like cool, you know it’s going viral.

Then somewhere in the middle of all that crap going on LeBron did me a huge favor and broke his nose. I had heard late at night probably 6 hours after he said that he would wear a Bane Mask, joking about his nose. So it just was like I had already done Tyrese as Bane (Dark Knight Poster) in the Black Superheroes let me put Lebron James as Bane real quick – get it out by morning so that’s what I did (LeBane James).

It took not even a few days for it to get up to 100,000 hits and then it soared up to 400,000 and right now I dunno it’s probably in the millions somewhere I lost track. Everywhere I turned I saw someone stealing it, posting it, and claiming it. It was wild to know it came from your mind and now its out there in the world like out there everywhere.

This unintentionally led to the Knights of the NBA Project, I had another art project at the time that I was working on called Renaissance. The idea was to do some creative portraits set in Medieval Time showing a select number of celebrities, but because of the response of the LeBane James I felt it was only right to do it with NBA Players. It started with a concept work with NBA Miami Heat Fearsome 3 fighting some giants – just fooling around and the following night after some hours of thinking it hit me to do portraits of NBA players as Knights. I wanted the style to be a homage to the 16th century portrait artist. The Game of Thrones concept was meant to represent Medieval Times and since I love the show it was the perfect pigeon carrier.

I know this can be like asking to name a favorite family member, but is there one that maybe came out better than you thought it might, or a particular player you felt was especially apropos for this project?

Right man, always with the hard questions – Drew. Fortunately I thought of that one. Yeah, I would have to say King James came out particularly finer than I originally planned it in my head. He was the beginning of the whole thing so it felt right, like KING JAMES as an actual king in a portrait too good of an idea to pass up. I feel like him and Kevin Garnett because of KG’S brute attitude he and King James would particularly fit the parts of being knights in Medieval Times.

I did my best to research each player and find what their personal lives consisted of, Kevin Durant I knew had a Christian background so I wanted to give him the cross on the chest same as Steph Curry.

What are your NBA rooting interests? Any thoughts on your favorite team(s) player(s), or general goings on in the NBA this season?

Crazy thing is I’m not generally a sports fan, I am the guy who watches the game every now and then. I am interested in the players and how competitive the game is, I sometimes wish art was the same. I played sports as a kid but that’s about it. I feel like NBA players are Today’s knights Today’s Heroes to most people so I feel it’s part of my creation as an artist to figure out a way to connect the two.

I noticed on your website that you have a place for other potential artists to offer to collaborate. Awesome idea! What kind of artists take advantage of this feature and can you share an example or two?

Thanks. Well I thought it was an awesome idea but that depends on who you talk to. But, I am constantly trying new things because that is the only way you can really make something happen.

Mostly people contact me with commissions and things like that, but they have no idea what they are getting into. They are usually surprised how serious I take the craft and how much order there is to coming up with an idea that works. Usually when I show my works it is a sense of okay that’s dope but what do we do next. But, I am a businessman and an artist so I tend to love creating with others as much as I love conquering a challenging project. These days companies tend to go with ad agencies but I am very much apart of the new school and don’t plan on abiding by any old rules and waiting for someone to come around and help with anything. I believe you must plow your own path.

What do you have in the works?

The NBA KNIGHTS project will run into June, and then I have a new project that will either be “Last Supper” or “Fairy Tale Land” depending on which one is finished first.

Also I will be offering Custom Knight Portraits based off of NBA Game of Thrones- Knights of the NBA.

Other than that I will be officially starting my new online store and private digital tool collection such as Photoshop Brushes, Patterns, 3d Objects things like that on alijahvillian.com

Whether it’s the arts or the NBA, you don’t have to be a hardcore fan to have a great deal of respect for the work others do. I can’t thank Alijah enough for taking the time to chat with us. Be sure to check out the rest of his work and stay tuned to Baller Mind Frame for all your NBA/Game of Thrones crossover needs!