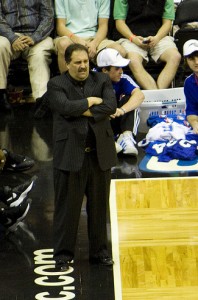 Former Miami Heat and Orlando Magic head coach Stan Van Gundy has agreed to a five-year deal, worth a reported $35 million, to be the Detroit Pistons’ head coach and president of basketball operations. Van Gundy returns to coaching after a two-year absence from the NBA bench, but is he the right driver for Motor City’s Pistons?

Van Gundy has previously coached eight seasons in the NBA and has not had a losing record. He started out as an assistant to Pat Riley in 1995. Van Gundy became head coach of the Heat in the 2003-04 season, when he and then-rookie Dwyane Wade reached the second round of the playoffs despite a 42-40 record. In his second season, the Heat acquired Shaquille O’Neal from the Los Angeles Lakers, and they ended up with the best record in the East; Van Gundy was named as the All-Star coach. However, the Heat lost to the Detroit Pistons in the conference finals that year. Van Gundy resigned just 21 games into the 2005-06 season and was replaced by Riley, but because SVG had already polished the team, they coasted to their first ever NBA title in 2006.

Stan Van Gundy then moved to Orlando where he won 52 games in his first season. Again, Van Gundy’s team lost to the Detroit Pistons in the second round of the playoffs. Then came the 2008-09 season, when Van Gundy led the Magic to the 2009 NBA Finals. Although they lost to the Lakers, it was Orlando’s most successful season since the Shaq and Penny Hardaway days.

Van Gundy has a career NBA record of 371-208 in seven-plus seasons as head coach.

The Detroit Pistons on the other hand have had six straight losing seasons, including three straight where they’ve won fewer than 30 games. This is a far cry from the dominant Bad Boys past of the Pistons, when they won back-to-back NBA titles in 1989 and 1990, and then won again in 2004 when they upstaged a star-studded Lakers team.

Pistons owner Tom Gores said in a statement, via USAToday.com:

“Stan is a proven winner in our league. He instills his teams with passion, purpose and toughness. He is a great teacher who will help our players grow and develop.”

The Pistons have the talent. They have outstanding young big men in Andre Drummond and Greg Monroe. They also have the formidable backcourt of Brandon Jennings and Rodney Stuckey. And finally, they have the enigmatic Josh Smith. If Van Gundy can teach this core and develop them, the Pistons will have a well-oiled machine.

Stan Van Gundy’s success with talented big men is well-documented. He spent a season with Shaq in Miami, and he developed Dwight Howard in Orlando. The Pistons have one of the fastest rising big men in the NBA in Andre Drummond, and if Gores wants to build his franchise around him, then Stan is the right man.

In Orlando, Van Gundy ran the “four out, one in” offense with Dwight Howard as the centerpiece. Van Gundy used Howard for post-up plays, alley-oops, and pick-and-rolls, while the other four players spotted up from the perimeter. The object of the offense was to optimize the talent of the big man in the post and in the lane while giving him the opportunity to kick it out if the defense collapsed. That being said, in Orlando Van Gundy had good shooters around Dwight. He doesn’t have that luxury now in Detroit, at least not yet.

Back in Miami, Van Gundy was one win away from the NBA Finals before losing to the Pistons in Game 7. The Heat had Shaq and Wade, but they didn’t have as many three-point shooters back then. So Van Gundy utilized the individual talents of those two superstars and he let the offense run through them.

It’s unclear and too early right now to say what kind of offense Van Gundy will run in Detroit, but here are two clear facts:

1. Van Gundy did not dictate the type of offense or have a signature offense. He adjusted his philosophies to whatever roster he had at hand, both in Miami and Orlando. Team composition always defined the offense for him

2. In both Miami and Orlando, he utilized the talents of his gifted big men and let them blossom into dominant NBA players.

In the past, Van Gundy ran tirades on analytics in the NBA. Listen to this SVG rant, via NBCSports.com:

“I don’t trust most of it. I read some of the stuff that people write on ESPN.com, you know, I’ll read stats on pick and roll defense and stuff that came off Synergy or somewhere else — I don’t know who the hell is recording that information!”

“To me, I think that a lot of the analytic stuff can be very useful, but if you’re using that in place of sitting down and watching film yourself and seeing what’s going on, you’re making a big mistake. And I don’t want to offend anybody, but I think one of the problems with analytics — I think it’s good; I used it, I love looking at it — but one of the problems is, there are a lot of people in a lot of organizations who don’t know the game, who all they know is analytics and as a result, that’s what they rely on. And they will use that to supersede what guys like us see with our eyes. And I think that’s a major mistake. There’s no substitute for watching film over and over and over again, and the only numbers I trust are the ones that my people believe.”

So what does this mean for coaching in Detroit? It’s Stan Van Gundy teaching at his best. It’s Stan Van Gundy’s passion at its best. And what he is teaching is that even if you have the best tools out there, it is useless without the right knowledge and experience. Van Gundy has the right knowledge and experience for the Pistons. More importantly, he has the passion for basketball.

Also, if you have a coach who is into watching film and analytics, then you have more than just the inspirational leader your players love to work for. There are coaches who win and succeed on inspirational motivation, but that is just as good as when the adrenalin is still up. Van Gundy knows basketball as both science and motivation, and that would be the key to long-term success.

As Van Gundy steps in as Detroit’s leader, he will have the opportunity to overhaul the lineup before he coaches it. Greg Monroe, the other talented Pistons big man, is a restricted free agent. Charlie Villanueva and Rodney Stuckey are unrestricted free agents. Monroe and Stuckey were major parts of the Detroit engine last season, but the 29-year-old Villanueva struggled with injuries. Unfortunately for Van Gundy, they might lose this year’s lottery pick if it’s not a top eight pick, and the Pistons are stuck with Josh Smith for another three years, with seemingly no takers on his expensive contract.

So before the coaching starts, Van Gundy will feel the “heat” and will have to do some “magic” with his current roster, but as team owner Gores said, via USAToday.com:

“Stan is more than just a great coach, he’s a great leader.

Van Gundy’s proven that in the past, and he wants a future for Detroit:

“It is an honor to be chosen to help Tom Gores build the Pistons into a team that competes for championships,” Van Gundy said. “Tom’s vision of building for the future, while seeking immediate improvement is a challenge that I embrace. We will work to put a team on the floor that reflects the franchise’s rich tradition and embodies the toughness and work ethic of fans in the Detroit area.”

The challenge is there right now, and while fans are keeping their fingers crossed, they have a reason to be optimistic.

“What I’m most excited about is how Stan can help us shape the franchise and instill what it means to be the best. He’s also a great communicator. My time with Stan has me convinced that he will bring our players, team and community to a very proud place.”

That very proud place should be the NBA playoffs for the immediate future, and hopefully the NBA title in a couple of years. The Bad Boys era was the best in Detroit’s history, but it seems like a distant memory. It’s about time to crank up that Motor City engine.