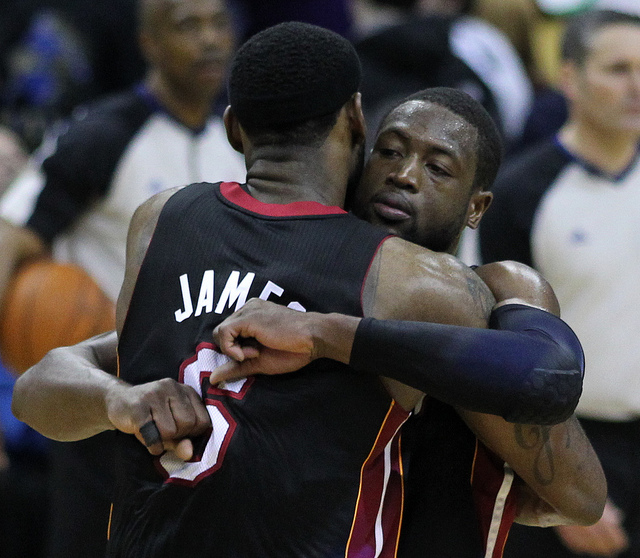 “Yo, I might be out, son.” Image courtesy of Keith Allison/Flickr.

Once again, again, the Cleveland Cavaliers won the right to make the first selection of an upcoming NBA Draft after a ping pong ball (or set thereof) deemed them the first selectors. This is the third time in four years that the Cavaliers have been lucky enough to win the NBA Draft Lottery. Third time. Four years. Conspiracy theories abound at how this could happen, and guess what? Most of them are connected, if not all (or both) to LeBron James, the current coddled star by the Association. Fair or unfair that’s just how it is. Don’t worry, soon enough, Kevin Durant will be the most polarizing player in the L that you either love or hate. 2016 free agency, my friends… 2016. Prepare to burn those Oklahoma City Thunder jerseys if Durantula doesn’t win a title from now until then. Book it! Or, rather, burn it!

So, the prevailing two theories as to why the Cavs seem to constantly win the draft lottery, something difficult to do once, let alone in back-to-back years (although, the Orlando Magic did do it when they won the right to draft Shaquille O’Neal in 1992 and Chris Webber whom they promptly traded for Penny Hardaway), but three times in four years is almost ludicrous. It’s as ludicrous as Ludacris wanting to be known as Christopher Bridges in his movie career. Sorry, Luda, but you’ll always be Luda. But, back to the point about the two theories… survey says:

Two interesting theories, both of which own a certain degree of validity. Neither of which can be proven, at least not the first one. Unless of course we find out Dan Gilbert has blackmail photos of Adam Silver and/or even David Stern AKA The Isiah/Dolan Connection, we’ll never truly know if the league is in fact showering Cleveland with gifts to make up for a wrong committed unto them AKA The Kobe.

If the first theory were true, and I’m not saying it is, what could possibly be the strategy? Is it because the Cavaliers built up such momentum in the city of Cleveland during the LeBron Years and the NBA wants to keep their presence strong in such a maniacal sports city thirsty for a title? “Screw you, Browns and Indians, the first title in the city in a loooooooong time will be a basketball championship! I said a long time! Again, seriously, a long time.” Maybe. Or is it because, it’s Cleveland and everyone should pity Cleveland? Nah, we shouldn’t. It’s kind of the same as asking a wheelchair-bound person rolling electronically and asking if he or she needs a push. Hmm… now that I think about it, before the Era of LeBron, the only consistent hit season after season out of Cleveland was “The Drew Carey Show.” Okay, clearly, it’s a pity party from the Association.

To the second theory, my gut reaction to the Cleveland Cavaliers winning the NBA Draft Lottery was – if the Miami Heat lose this series versus the Indiana Pacers (and remember, they were leading Miami one game to nil at the time, so I was jumping to conclusions), LeBron is going to bolt and join Kyrie Irving, Dion Waiters and Joel Embiid! It sounds crazy, but we all know that LeBron is on a mission to shut everyone up when it comes to his legacy. One way to do that is to keep winning titles because, you know, multiple MVPs and various awards, as well as your peers saying you’re the best isn’t enough to secure a legacy these days. As Jerry Seinfeld would say, “Jordan!” So, after this season, LeBron will look at what the Heat has – aging stars and a skeleton crew of well-oiled role playing parts, as well as an established head coach in Erik Spoelstra that Bron Bron gets along with and respects – and what the Cavaliers have – youth, a superstar deemed so too early in Irving, youth, yearning fans that want The King back, youth, and did I say youth? LeBron wants to seriously contend for a title, and honestly, whatever team he ends up with instantly becomes a contender, but does it bring the Cavs up several levels from where they are now to that NBA title level? In a word, yes.

Of course, it won’t come easy or immediately, but getting into the NBA playoffs should be the goal, and after building chemistry and consistency during the regular season, who knows what happens? While I do think Kyrie Irving is a little overrated at this point (mostly because his endorsements wearing a wig and make-up inflates his value to a lot of people; and I don’t necessarily mean the fanatics that dig Lady Gaga or Cher), he’s obviously very talented and, finally, was relatively durable for a whole season. But, will he sign an extension this offseason, his first time being eligible to do so? What is the timing on this for Irving if he thinks LeBron is coming, and conversely, what is the time table for LeBron if he wants to join Irving?

But, the real point of legitimacy here is – who’s going to be the head coach? There are some old coaches with credibility such as George Karl, and to a lesser degree, Lionel Hollins, that could sway LeBron to make his Cleveland Comeback. Imagine if they could pry Mike Krzyzewski? Done deal! Maybe get Mark Jackson to leave ESPN and get back on the sidelines? Probably not. The Cavs can approach this coaching search in two ways if they do want LeBron back. Hire someone hoping that LeBron respects the guy OR wait until July and use the fact that LeBron can pick his coach as leverage.

In summary, here’s what we know. The Cavaliers are either lucky and we need to chop off Dan Gilbert’s foot while having it wear a leprechaun boot the next time we play the lottery that actually pays you millions of dollars or the NBA gives the sad face emoji every time they text any Cavs personnel, using it as a period. And folks, that’s really all we know. 🙁

Dennis Velasco is the Publisher of Baller Mind Frame, rarely writing as he mostly stalks the site and its team of excellent writers. He’s also a huge fan of “The Drew Carey Show” and looks at Cleveland sports as if it were a fool and he was Mr. T.