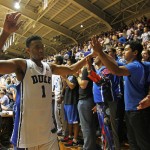 At last week’s pre-draft camp in Chicago, I posed the following question to 31 draft-eligible players: If you were a general manager and had the No. 1 pick in the June 26 draft, whom would you select?

In a draft, where NBA officials and so-called basketball experts adamantly insist there are four or even five legitimate No. 1 candidates, Jabari Parker blew away the field.  Racine Journal-Times