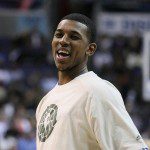 Veteran shooting guard Nick Young, who led the Lakers in scoring this season, has a player option for the 2014-15 campaign worth $1.2 million.

A source very close to Young recently told Basketball Insiders the Los Angeles native would prefer to wear a Lakers uniform next season despite the uncertainty of the team’s roster and the vacant head coach position.

However, the source fully believes Young will elect to opt out of his deal this summer in order to fully evaluate his options on the free agent circuit in July. Basketball Insiders