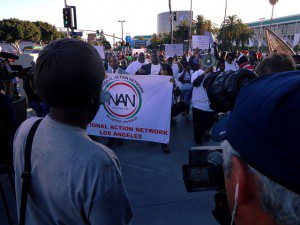 Los Angeles Clippers owner Donald Sterling says the NBA is unfairly singling him out and slamming him with “draconian” punishment, all prompted by the leak of a private conversation he claims was illegally recorded.

In a scathing 32-page response sent to the league Tuesday and obtained by USA TODAY Sports, Donald Sterling instead says he will fight the league’s move to force him to sell his team, and he noted he has received offers of more than $2.5 billion for the franchise. Sterling also says the league’s proposed punishment would cause his family to take an “egregious” tax hit on the sale of the club.

Regardless of his comments in the recording, Sterling says, nothing he said violated his contractual agreements with the league.

“A jealous rant to a lover never intended to be published cannot offend the NBA rules,” said the document, signed by Sterling. USA Today

In the predictable news column for May 27, 2014, Donald Sterling announced he would be fighting the NBA’s attempt to force him to tell the team after reports 72 hours earlier claiming he would allow Shelly Sterling, his wife, to negotiate terms of the sale.

A lot of conjecture is being painted in the halls of journalistic integrity. Several pundits loudly declared Donald Sterling would never sell, and he was going to fight to keep the team all along. Many have claimed the NBA will have a unanimous vote to oust Sterling, and anything less would cause a player boycott. There are whispers of the NBA cancelling all player contracts with the Clippers if the fight continues into next regular season.

We should just be focused on reading and reporting things as they happen instead of attempting to apply pressure by throwing out hypotheticals. The process needs to play itself out without all the histrionics which actually make it more difficult for the NBA to accomplish the goal of removing Sterling. – AL