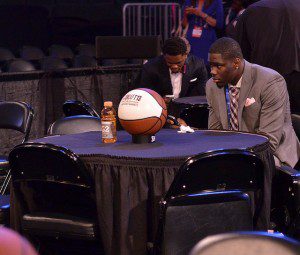 Yesterday marked exactly a week since the Cleveland Cavaliers won the NBA Draft Lottery with the ninth best odds coming in. Conspiracy? Not quite, but rather a system that may need to change soon.

The format of the lottery is something that comes up every year and will continue to come up until there is some type of change. It also seems that what the Cavs should do with the top pick in the draft is becoming a yearly discussion. They now have the first overall pick for the second year in a row and for the third time in four years.

It is no secret that last year’s pick, Anthony Bennett, did not pan out all that well. He is still young and seemingly should get better based on how poorly he played this year, but he still does not look like he will ever be close to being a star.

This makes this year’s draft all that more important for the Cavs. They have a new GM in David Griffin who is trying to keep Kyrie Irving long-term and get this team back to the playoffs for the first time post-LeBron.

The way to do that is through the draft.

Now it makes sense that some would be cynical with the performance of Anthony Bennett in regards to keeping the top pick if trades are indeed available. The only issue with that mindset is that this year’s draft has clear-cut prospects who are NBA-ready. The group of Joel Embiid, Andrew Wiggins and Jabari Parker could all easily go in the top spot, with Embiid looking like the top pick at this point in time.

The only way a trade would make sense would be if a young star would come to the Cavs AND have a long-term deal in place. For example, if Kevin Love were a trade possibility then he would need to sign an extension for the Cavs to even consider making the deal.

With that being said there is no other situation in which the Cavs should trade the top pick. This class is far too deep to pass up on one of its top prospects.

For Cleveland fans it is understood as to why they may want to trade for a proven player. This is due to the team toiling at the bottom of the Eastern Conference for the past four seasons, while their team’s top picks have done nothing to vastly improve the team’s record.

This has been the case for four excruciating years. Take two scenarios and see which is worse:

1. The Cavs trade the top pick for a proven player in the league. This player stays for four years in which the Cavs make the playoffs each year, but never even advance to the NBA Finals. After four  years, the player leaves, along with the core of the current roster. The next five years are spent in the bottom of the standings. As for the team that received the pick, they spend a few years struggling, but eventually build into a legitimate contender around the top pick.

2. The Cavs use the top pick in this draft on Embiid/Wiggins/Parker. They struggle this year and miss out on the playoffs, but after that they are a regular playoff team, as they were with LeBron. The top pick fits into the roster perfectly with Kyrie Irving, Dion Waiters and Tristan Thompson and form one of the better young cores in the NBA.

The first scenario may be good in the short term, but the possibilities from the second are far more exciting. Even if they keep the pick and he is a bust, it just means that they are bad for one more season. Teams like the Cavs must be patient and avoid making blockbuster deals that give other teams great opportunities. They need to look at this current draft class and realize that they have a chance to add a special player to their roster who may need time to reach his full potential, but who will almost ultimately become a success.