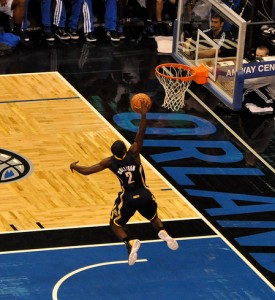 Darren Collison of the Los Angeles Clippers will forgo the second year of his contract that would have paid him $1.9 million to become an unrestricted free agent this summer, a league source informed CSNNW.com.

Collison, 26, signed a two-year, $3.9 million deal with the Clippers last offseason, which is an extreme hometown discount the Southern California native agreed to. The second year was a player-option.

The source’s response to our inquiry was, “Darren is definitely opting out.”

The Clippers are very much Collison’s preferred team of choice due to the team’s unique bond that only drew them closer in the midst of the Donald Sterling recordings. However, we’re told he’s keeping his options open. CSNNW

Considering his production, Darren Collison has one of the most team friendly contracts in the NBA. The average salary in the NBA is $5.15 million. Despite being an above average point guard his entire career, Collison has never made more than $2.3 million for a single season. That’s pretty crazy.

The Indiana Pacers would have a much better chance to defeat the Miami Heat with Collison still at the helm. He already made his mark on the playoffs. Don’t forget, the only reason the Clippers weren’t down 3-1 to the Oklahoma City Thunder in this year’s Western Conference Semifinals was because Collison pulled them off the proverbial playoff mat by himself.

Several teams need point guards including the New York Knicks, Los Angeles Lakers, Indiana Pacers, Charlotte Hornets, and Houston Rockets. Collison has done more than enough to earn his turn as a starting point guard making starting point guard money. The only certainty is that any team that acquires Collison will be happy to have him. – AL