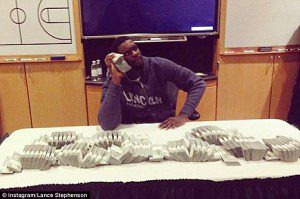 Indiana has a critical choice to make as far as where the Stephenson bright line should be. Is a starting salary of $10 million too much for a tantalizing player who can be erratic both between the lines and between his temples? Is $9 million too much to give Stephenson when the Pacers’ roster is so clearly flawed in other ways? Final judgment on those questions and many others will be rendered as a function of deciding issues on an even larger scale. The fundamental concern facing Indiana is this:

Indiana’s roster problems are as rooted in those core pieces as they are in its supporting cast. Hibbert can be a terrific defensive anchor, but he depends on players like George, Hill and West to handle their respective assignments and funnel opponents in a certain way. All five starters are useful offensive cogs, but together they yield underwhelming scoring marks and tend to struggle even more when even a single player is subbed out. A few better pieces off the bench would help. All told, though, this team walks so fine a line that every reserve is put at an inherent disadvantage. There is no predominant star to make life easier for lesser subs. Instead, there is only the delicate balance of a starting lineup that thrives as a self-contained unit and collapses with even the slightest compromise. Sports Illustrated

Lost in all the discussion about how turned on Lebron James was after Lance Stephenson blew into his ear is the inevitable contract negotiation for Stephenson once the Pacers’ postseason comes to a close. A player’s monetary value is determined by several factors such as team need, athleticism, potential for improvement, effort, etc. One of the forgotten, yet important, factors is reputation. Oh look, there’s Stephenson’s reputation in the sky!

The same thing happened to J.R. Smith last year. Smith was expected to sign for something far above the mid level exception (around $5 million) and ended up signing for three years, $17.95  million with the New York Knicks. No team was going to sign Smith for that amount of money after his poor production and silly on-court behavior, but the Knicks signed him anyway because Donlan likes him or something else idiotic. This is literally the exact same narrative that Stephenson is going through right now except Larry Bird, president of the Indiana Pacers, doesn’t find Stephenson’s pranks or foolish smack talk endearing. Bird has been looking for a reason to make some changes since the first round of the playoffs.