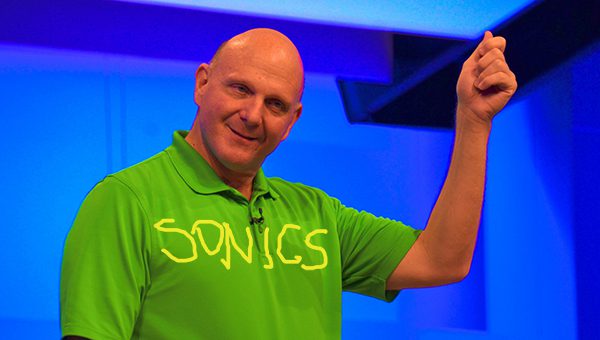 There is no shred of proof (audio recording or otherwise) that Steve Ballmer would move the Los Angeles Clippers to Seattle. I’m just spitballing here, but we all know it’s the proverbial microchip-armored elephant in the virtual room. Full disclosure, I’ve been thinking about moving to Seattle and its one major hindrance for me would, if my hypothesis here is eventually answered in the affirmative, no longer be a hindrance at all. So, yes, this post is selfish to some degree on my part, as well as wishful thinking, but I’ll be as fair as possible… Clay Bennett style.

Ballmer, former Microsoft CEO, now retired, reportedly signed a sales agreement to acquire the Clippers for a purchase price of $2 billion dollars. Not, million, Dr. Evil, but an “illion” bones starting with a B. The recent Milwaukee Bucks sale was “only” $550 million, so this is an astronomical investment on Ballmer’s, but all things being relative, there’s also an astronomical difference between the two teams on the court and in the respective city in with each resides. That said, is Seattle much different than Milwaukee from a basketball perspective?

Publicly, Ballmer has stated that he will not move the Clippers from Los Angeles because it would be “value destructive.” That’s a valid statement and I’m glad he acknowledged that fact because I do think he believes that to be true. However, as most people of his ilk (owners of a lot of “f*<£ you money"), Ballmer will still do want he wants regardless. If it's to move the team to Kalamazoo, Michigan, he'll do it, but we have to assume that if he does, it's Seattle all the way. Ballmer was part of a group that wanted to purchase the Sacramento Kings and move them up north, so there's precedent on his part, as well as the gloomy and angry one that saw another prospective buyer, the aforementioned Bennett, also say he wouldn't move the team being purchased. Stand down, SuperSonics fans. Put the pitchforks and torches away. So there are powerful elements here, including karma, that could see an NBA franchise back in Seattle. Cross your caffeinated fingers! The "how" is a beast I won't speculate on, but going the Bennett route of asking residential taxpayers to fund a highly-priced arena on their backs is one way. And, wouldn't it be easy to erroneously say, "Oh, see, the fans didn't support the team," when really, it's all about the loopholes that rich men can afford to find and execute on. If the Clippers do move, it will have absolutely nothing to do with the fans, as it didn't for SuperSonics fans. Let's be clear on that. As to "why" the move should happen, well, I can opine on that with some sort of certainty, and I'm sure it's all things other people are thinking about too. The Los Angeles Lakers own L.A.
It’s not a surprising or gasp-inducing statement. It’s more of a duh statement. Despite the recent success of the Los Angeles Clippers, they will never own the city the way the Lakers do. Can we just admit that there are a significant number of bandwagon Clippers fans for the same exact reasons other sports franchises have experienced? It was kind of hipster-ish to root for the underdog and constantly losing Clippers, and there is no question there are long-time diehards that suffered through the horrible draft choices and on the court futility. Respect to you lot!

However, ever since the Blake Griffin boom and Chris Paul trade that dropped on the team’s lap, Clippers fanhood has surged. As well it should. However, if the Clippers leave, those same fans, particular the local and/or casual sort, will have the Lakers, arguably, the greatest franchise in NBA history, to fall back on and root for. But, make no mistake, in the overall scheme of things, this is not a consolation prize, as it is more of an upgrade.

The Clippers (or whatever they’d be called) would rule Seattle
Apologies to Sue Bird and the Storm, as well as the Super Bowl champion Seattle Seahawks, but this may be more of a duh statement than the one above. Blake Griffin has more star power in his pinky than Russell Wilson and Richard Sherman’s bodies combined. For football players, you need to be extremely special or champions to get your mug in front of the masses. Griffin just had to jump over a car. Paul is such a star, he’s being used twice at the same time because people will and are eating it up like cake.

It’s a lot easier to identify basketball players because unlike football and baseball, there’s no equipment hiding their faces. There’s a high degree of brand recognition that marketing absolutely loves. So when you bring in Blake Griffin and Chris Paul into a basketball-starved city that not only has natural affinity for having an NBA franchise in their city, but an element of necessary redemption as well, the Clippers would be the proverbial toast of the town. And they wouldn’t even need to win a title to be sustainable. Q rating, people, look it up.

Merchandising! Merchandising! Merchandising!
It worked for the Brooklyn Nets with their branding and black and white motif. Not so much the New Orleans Pelicans, but c’mon, with that team name it wasn’t a surprise. It should work for the Charlotte Hornets because of the brand’s deep history of being loved thanks to Larry Johnson and Alonzo Mourning. Grandmama!! Plus that teal color actually took off!

So, tell me how the merchandise for a new (possibly old, dependent on if the SuperSonics name is used, and shouldn’t it?) team in Seattle, particularly with star players, doesn’t sell like crazy. And not just in the Pacific Northwest, but the world. Reign Man Redux, my friends. An even better version even, the way the liquid Terminator was essentially better than the Ahnold one. The Glove? All respect due to Gary Payton, but CP3 is the Glove, Scarf and Hat.

Do you see where I’m going? Everyone loves retro and known brands. It’s just how it is in today’s somewhat lackadaisical world. Of course it sucks in places like Hollywood where originality and provocative content is treated like, well a Sonics fan, but the merchandising could be Dorothy huge in the Emerald City!

Of course, everything is so preliminary at this point, but the storylines jump off the screen and its beginning of Donald Sterling allegedly being a racist, but at the very least an old guy that wanted to get into a young lady’s pants, and now having to be purged from his flock of gajillionaires who really just want to protect their own product is kind of an funny start. Maybe, just maybe, the end will have Seattle and its jilted Seattle SuperSonics fans laughing in joy.