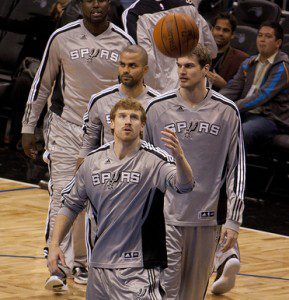 San Antonio Spurs head coach (and Mr. Cuddly-McSmiley) Gregg Popovich decided to switch up his starting lineup by substituting the sweet shooting power forward (and Ron Wesley Lookalike) Matt Bonner in place of Tiago Splitter. This should have been a no brainer since the Spurs were +20 with Bonner on the floor during Games 3-4, while -27 with Splitter. And it showed vividly… but not straight away.

During the first quarter of the game, the Spurs were up 7-2 over the Oklahoma Thunder with 8:50 left when Reggie Jackson did his thing and scored six points in less than five minutes in order to put OKC up 11-10. Hustle and heat from Jackson and the Thunder’s difference-makers (Kevin Durant, Russell Westbrook, and Serge Ibaka) helped OKC get out on top 24-19, but after San Antonio hit all of their last seven shots, both teams were tied 32-32 by the end of the first. Manu Ginobili, Tim Duncan, Boris Diaw took control for the Spurs and put their team up 65-55 after the end of the first half.

Then it got boring. Yes, boring.

The Spurs took their biggest lead of the game thus far behind a Tony Parker jumper that pushed San Antonio up 77-63. By the time Popovich put in Marco Belinelli in place of Bonner, the Spurs were leading 87-70 and were shooting 55% from the field. OKC would head into the fourth quarter trailing by 20 points. Danny Green started the final 12 minutes by hitting a three, proving that the veteran team showed no signs of slowing down. By the time Bonner hit the floor again in place of Diaw, his Spurs were up 104-76. San Antonio would end up taking Game 5 117-89, leaving the clean up crew at AT&T Center to mop up all of OKC’s blood.

Game 6 moves back to Oklahoma City on Saturday Night.