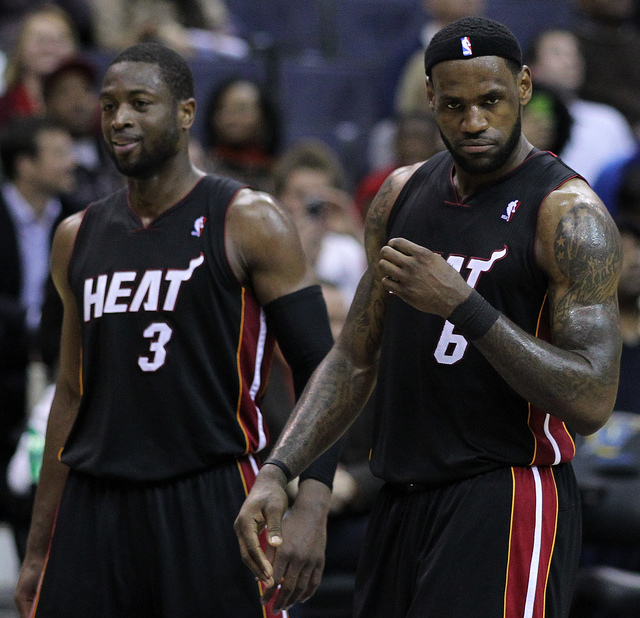 For the third year in a row, the Miami Heat ousted the Indiana Pacers in the NBA Playoffs and sent the blue and gold off to pack up their lures, rods and ubiquitous khaki-colored fishing vests. For the second series in a row, the Heat proved that the first 82 games doesn’t mean jack during the postseason! In the previous round, the Heat beat the Brooklyn Nets, who went 4-0 against Miami during the regular season. Obviously, this caused a lot of buzz previous to their series, but in the end, the Heat won in five games. Buh-bye. The Pacers ended up having the best regular season record in the Eastern Conference and were seeded first. The Heat took an extra game, but in the end, the Pacers also went buh-bye.

In Game 6, the Heat took their game to another level, beating the Pacers, 117-92. LeBron James, after a horrible Game 5 full of playoff career lows, finished with 25 points (15 points in the first half in which he was constantly attacking the basket), four rebounds and six assists in only 32 minutes of play. Chris Bosh tied James for the points lead in limited minutes (29) as well. Dwyane Wade, the third member of this Big Three, also played limited minutes (25), but had a solid 13/6/6 with a couple of steals. The team will see more rest as the Oklahoma City Thunder and San Antonio Spurs, who lead the series 3-2, battle it out to see who will join the Heat in the NBA Finals, the fourth year in a row that Miami will be going for a title.

Of course, it wouldn’t be a Heat/Pacers game in the playoffs without more Lance Stephenson shenanigans. The soon-to-be free agent didn’t seem to heed Larry Bird’s words, both stated and intimated, and could possibly have jeopardized his chances in getting re-signed during the offseason by the team… nah. Born Ready is too young and talented to be let go just like that, but he did have a subpar game with 11 points, four rebounds and a paltry solo assist in 36 minutes. However, Stephenson is definitely a star in the making as long as he stays within a system that could maximize his versatile skill set. And, of course, he doesn’t let his demeanor take over and have it be his sole identity. Paul George, a certifiable star, finished the game as its leading scorer with 29 points and eight rebounds.

Both teams will have uncertainties once the offseason hits, but this series can be put in the books because the Heat were most certainly better than the Pacers.