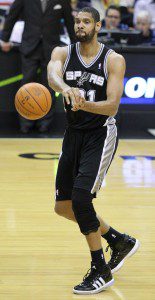 With the AT&T Center’s air conditioner malfunctioning and temperatures approaching 90-plus degrees in the arena, the San Antonio Spurs were able to withstand the conditions and defeat the Miami Heat, 110-95, in Game 1 of the NBA Finals.

The Heat started out this game much like any other, running the ball through Chris Bosh for mid-range jumpers, and testing his newfound marksmanship badge from behind the three-point line. The Spurs countered with a dose of Tim Duncan in the post and Manu Ginobili finding his touch from outside.

The first quarter was mostly a back and forth affair, until the last 2:30 when the Spurs turned up the defensive pressure and built a 26-20 lead to close out the first 12 minutes of play.

Ray Allen and Dwyane Wade made their presence felt in the second quarter, scoring a combined 16 points on a mixture of threes and layups. San Antonio answered with Ginobili and Marco Belinelli putting on a little show of their own, to keep the Spurs on top 54-49 heading into halftime.

The Heat came out in the third looking to have the edge in the energy department, as the Spurs had issues putting the ball in the basket. LeBron played his customary role of the third quarter assassin, scoring 10 of his game-high 25 points to give the Miami Heat a four-point lead, 78-74 to end the third.

Chris Bosh kicked off the fourth just as he started the game, scoring nine-straight points for the Heat pushing their lead to seven.

In the latter stages of the fourth quarter the steamy temperatures were visibly taking a toll on all of the players. Everyone seemed a step slower than usual, but none moreso than the King himself, LeBron James, as he appeared to be battling cramps throughout the final quarter. At one point, James even had asked for a break to receive treatment during a 15-4 Spurs run that turned the game around.

Fresh off checking back into the game with 4:09 remaining, LeBron drove to the basket, scoring on a layup to make it a two-point game with the Spurs on top 94-92. That was the last time he would touch the ball in Game 1.

Upon the impact of LeBron’s feet touching the ground you could see the pain wash over his body as spasms shot thorough both legs, leaving him immobile on the baseline as play continued. As James limped to the sideline under certain duress, he was met halfway by trainers and Heat players alike to help carry him the rest of the way to the bench.

With LeBron out of the game, the San Antonio Spurs turned up the pressure, scoring five straight points on a Danny Green triple, followed by a Boris Diaw layup to put the Spurs up 99-92. Mario Chalmers countered with a three of his own, closing the gap to four with 2:46 to play.

The Miami Heat would not score again.

While Miami couldn’t buy a bucket in the final minutes of Game 1, the Spurs couldn’t miss. Kahwi Leonard and Tony Parker put the nails in the coffin with back-to-back threes, giving San Antonio a 10-point lead.

An errant pass by Chalmers led to Kawhi Leonard hitting a final three-point dagger, giving the Spurs a 15-point lead and the Game 1 win.

LeBron James: “After I came out of the game, they kind of took off, and it was frustrating sitting out and not be able to help our team.” “It sucks not being out there for your team, especially at this point in the season,”

Erik Spoelstra: “I think it felt like a punch in the gut when you see your leader limping like that back to the bench.”

Danny Green: “You could see the heat was getting to a lot of guys. If I played as many minutes as he [LeBron] did, I’d probably be cramping up, too.”