This summer the Los Angeles Lakers will have a unique chance to turn things around. They will have a chance to perform radical changes and re-enter a winning course. Although the Lakers do have a big chunk of their salary committed to Kobe Bryant and Steve Nash next season, they will have room available to bring in some significant pieces, players who can alter the course of the franchise. According to some of the latest reports the Lakers are eyeing Indiana Pacers guard Lance Stephenson and Detroit Pistons forward Greg Monroe. Let’s examine how each player could assist the Lakers moving forward and how realistic of a target each player is for LA.

The 23-year-old emerging guard with an eccentric personality is one of the hottest free agents of the summer. Although his antics both on and off the court turn off some teams around the league, no one can really question the fact that Lance Stephenson is talented. In fact, the third-year Cincinnati product recorded a breakaway season and he finished second in voting for the Most Improved Player of the Year, right behind Goran Dragic.

The Los Angeles Lakers are looking for affordable pieces to place in their mix and they would be extremely satisfied if those pieces could turn out to be franchise players. Despite his questionable character, Lance Stephenson possesses those attributes and that’s exactly why he is under the Lakers’ scope.

Stephenson finished the 2013-14 season with 13.8 points per game, five more than his previous season. He also saw a drastic increase in almost any stats category. He put up 4.6 assists and 7.2 rebounds per game while he also improved his shooting from the field to 49.1 percent. Apart from the improvement in his performance, this was the season that Lance Stephenson solidified his role as a starter for the Indiana Pacers. Larry Bird decided to trade away Danny Granger, who was the longtime starter alongside Paul George when he was healthy. Stephenson quickly emerged as the co-leader of the Pacers together with George. As a matter of fact, in many cases it was Stephenson who had to take the team on his shoulders on the offensive end.

All of his deeds and attributes made the Los Angeles Lakers desire him. And they are expected to make a strong push to land him. Of course, the Lakers will have to think twice before offering Stephenson a big contract, mainly due to his immaturity. Although he is a great player and he is projected to become even better over the next few years, his antics sometimes ruin the team’s spirituality and hurt its focus. That’s what happened with the Indiana Pacers during the 2014 Eastern Conference Finals, when Stephenson made aggressive public statements about the Heat and continued to act immaturely during some games.

It’s expected for Stephenson to receive big offers from several teams around the league. Nonetheless, any team that tries to sign him should consider the risks of such an investment. At the moment, though, the Los Angeles Lakers are in a situation where they have to take risks and Stephenson seems to be one of those. 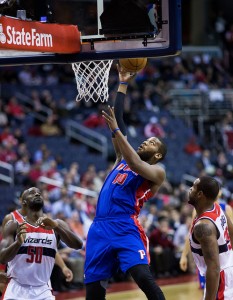 Monroe is getting better and better every season and is just 24 years old. If I were Stan Van Gundy, I wouldn’t let Monroe walk. Yes, it was made crystal clear that the three-pillar frontcourt of Monroe, Andre Drummond, and Josh Smith doesn’t work, but really, Monroe’s value is going upwards. He is a 6’11” and 250-pound power forward/center who can play both from middle and close range. He has good post moves and a solid mid-range jumper.

The only issue the Detroit Pistons have with Monroe is that he will be a restricted free agent this summer. And that’s where the Lakers can strike. If they really want to bring in Monroe, they will have to pay the price. At the moment, it’s not that certain that the Lakers will invest a big chunk of their salary space to overpay Monroe so that they can acquire him. The Detroit Pistons are projected to try and retain him and match some offers Monroe receives, but of course if he becomes too expensive they might let him walk.

Greg Monroe finished with 15.2 points, 9.3 rebounds, 2.1 assists and 0.6 blocks per game in 32.8 minutes. He also shot 49.7 percent from the floor. He is arguably better and certainly younger than Pau Gasol, the second-highest paid player on the Lakers’ roster last season. So if LA wants to bring in the Spaniard center, they might think twice before choosing to do so. Because unless Gasol agrees to take a big pay cut, Mitch Kupchak could land Monroe for almost the same amount of money. In fact, Monroe could emerge as a franchise big man, given that with no Josh Smith and Andre Drummond on his side, he will have more room to operate.

One significant fact that could change the story of Monroe and the Lakers, though, is the injury of Joel Embiid. The seven-foot youngster, who was projected to be the top overall pick of the upcoming draft, suffered a foot injury. That’s why his chances to make it to the top spots of the draft are now extremely low. The Lakers won’t select a prospect before No.7 but if Embiid is available when their turn arrives, they will most probably pick Embiid right away. And if they do so, their future plans change radically. If they don’t they will have to continue searching for a solid big man, like Greg Monroe.