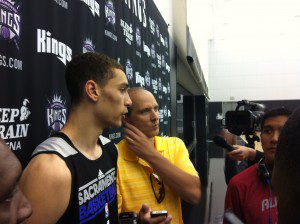 In an NBA draft so full of young talent and potential superstars, it seems fitting that the Sacramento Kings have been exploring every option, making sure to check every nook and cranny for what may be their first round pick in the 2014 NBA Draft.

The team has already hosted a number of workouts featuring probable lottery choices Marcus Smart and Noah Vonleh, and continues to do so just days before Adam Silver will announce the incoming rookie class.

On June 20, the Kings invited another group of players to workout for the team, as Rodney Hood and Zach LaVine worked out at Sacramento’s practice facility. Both could be waiting when Sacramento’s on the clock with the eighth pick. Hood and LaVine have risen steadily in the months before the draft, as their increasingly apparent upside has come to the forefront in the eyes of most NBA teams.

With the uncertainty surrounding Rudy Gay’s option to opt-out of his next year with Sacramento, the Kings strongly value Hood’s shooting ability, making a legitimate case for him to be taken in the lottery if Aaron Gordon and Noah Vonleh have already been taken by the eighth pick. He may have arrived on the scene as a possible lottery pick just weeks before the draft, but Hood appeared confident in his natural ability in his workout with Sacramento.

“I just tried to showcase what I can do and shot the ball,” Hood said. “I don’t go to teams and try to reinvent myself and show what I’ve been working on. I just go and shoot the ball and that’s why people are really excited about me.”

His offensive upside and consistent shooting stroke are being regarded highly by Sacramento days before the draft. 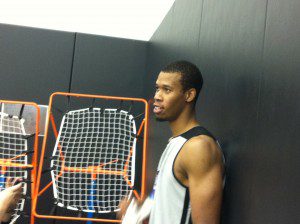 That said, the 2013-14 Duke captain raises major concerns regarding his defensive strength, especially at the highest level of competition. While all the makings of a formidable defensive player are evident in his 6-foot-8, 215 pound frame, Hood’s defensive standing is one of the clear factors which may keep him out of the lottery. For Sacramento, however, his length and versatility on the offensive side of the ball seem to outweigh negative defensive components of his game.

“He’s like a lot of college kids, they’re going to have to adjust to the talent level when they get to the NBA, where things are a little harder and athletes are better. But Rodney’s a real good athlete himself, very intelligent player, so he’ll figure it out,” said Mike Bratz, Sacramento’s assistant general manager.

While Hood’s early projected draft position floated around the 20th pick, recent projections have him being selected late in the lottery, in reach of Sacramento’s eighth overall selection. If other options are already taken at that point, Hood may start his NBA career in Sacramento.

Falling close to Hood in many 2014 mock drafts is LaVine, arguably the most athletic guard in the draft. He boasts the ability to play the role of a combo guard, which may be to Sacramento’s liking since Isaiah Thomas’ future with the Kings is uncertain.

When asked about which guard position he would be most comfortable playing at the next level, LaVine made it clear that he is willing to play any role his future team needs, a clear indication of his team-oriented mindset.

“My ultimate goal is to be the best basketball player I can be. Going to the NBA, I’ll play whatever position my coach wants me to play whether it’s at point or it’s at off-guard.”

LaVine has made a name for himself prior to the draft with his length and athleticism, displaying his quickness on the offensive side of the ball as shown throughout his slew of workouts with professional teams. In just 24.4 minutes per game, he floated around double-digit scoring and pulled down 2.5 rebounds, utilizing his long arms and leaping ability in his 2013-14 season with UCLA.

While many have viewed LaVine as an incredible athletic specimen without much maturity to his game, LaVine has already drawn comparisons to NBA players such as Jamal Crawford. He has potential to handle the ball as well as Crawford, and could be a valid option coming off the bench for Sacramento to provide a reliable role player.

This won’t be the last group of players brought into Sacramento’s training facility to showcase their talent in front of the Kings organization, as the team is hoping to explore all possible options and avoid wasting a lottery pick in a draft littered with talent and probable stars.

“I like several players … but ultimately we’re going to have to decide who we like best, and hopefully that’s the player that ends up being available,” Mike Bratz said.

The Kings are making sure to give every potential player a chance to prove his worth before June 26, the day of the draft.