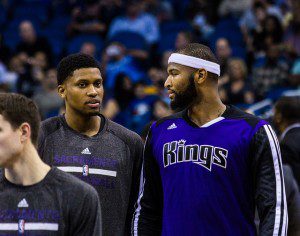 Before June 22, the immediate future of the Sacramento Kings was in a state of limbo, with Rudy Gay’s pending decision on whether or not to stay with the organization as uncertain as it had been when the regular season ended just weeks before. For Sacramento, future success was linked directly to whether or not the team’s best scorer would opt into his $19.3 million player option and spend at least one more year with the Kings.

For now and for the future, Sacramento’s front office has a breath confidence in the future of Kings basketball.

Gay made his decision in concert with the team’s draft day decisions, working with Kings general manager Pete D’Alessandro to come to the best possible option before June 26. Even though he may only be staying with the Kings for one more season, Gay has made it clear that he intends to aid in bringing his team long-term success by keeping in close contact with the front office and being timely in all upcoming decisions.

“It certainly makes life easier knowing what Rudy wants to do, and I think it says a lot about him that he would let us know for us to plan,” D’Alessandro said. “It gives us some certainty for that position which helps us build a team around the core we have going on.”

It certainly helps the Kings with any last-minute draft day choices, as Joel Embiid’s broken foot has dropped him down a few pegs on a majority of 2014 mock drafts. Sacramento has Gay for one more year, making it easier on Kings management to select Aaron Gordon in the draft if he is available at number eight. Had Gay decided to leave the team and enter free agency prior to the 2014-15 season, the eighth pick would have likely been burned on a less talented, but more offensively imposing draft pick.

It bodes well for the Kings to have the luxury of taking a player with vast defensive potential such as Gordon, as the priority seems to be a defensive-minded player who can make plays in transition and force turnovers. If Gay had chosen to leave, the team may have been forced to select Doug McDermott or Nik Stauskas to fill in for Gay’s lost scoring and three-point shooting excellence. For the time being, Rudy Gay seems to have found his place.

After the 2014-15 season, however, Gay’s future with the Kings is uncertain.

“We wanted Rudy Gay not for a year… we wanted Rudy Gay for a bigger vision and I think he came in here and did a lot of the things that we felt he would do,” D’Alessandro said. “We see this being something we’d like to be something longer.”

Sacramento invites the idea of signing Gay to a new long-term contract, as he is just entering his prime and played his best season of basketball in the Kings’ offensive system. Getting a deal restructured for the future is a muddled topic for the team at the moment, but Gay’s firepower when playing with DeMarcus Cousins is cause to consider re-signing him for a longer period.

With this current team seeming to be the best opportunity for personal success in Gay’s career, Sacramento’s front office has to earn his future commitment by making it clear that a plan is in place. With new ownership and a front office committed to maintaining one of the team’s cornerstones in Gay, it’s very possible that he could spend a majority of his remaining career in a Kings jersey.

Gay seems to have an overall belief in the current system, but talks for later contracts have been inconclusive. The fact that he approached D’Alessandro prior to the draft brings assurance for his future in Sacramento, as he may have already bought into the long-term plan for success by coordinating his decision for the upcoming draft.

Although he only opted into one more year, Kings fans may be watching Gay play for years to come as the team which healed his shooting deficiencies and gave him the chance to be a better teammate and player holds him in the highest regard.