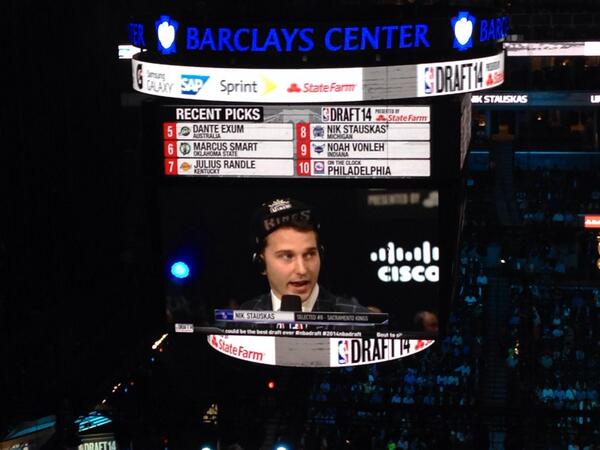 In a 2014 NBA Draft with the first-round depth to bring a slew of superstars with it, the Sacramento Kings held an eighth pick which meant the possibility of Aaron Gordon, Julius Randle, Marcus Smart and a handful of others projected to be immediate starters in a professional lineup.

On the clock at number eight, with the aforementioned names off the board, the Kings decided to bring another young combo guard in Nik Stauskas to the team’s backcourt.

The pick, however surprising, may be part of a bigger picture for Pete D’Alessandro and coach Michael Malone.

Stauskas brings with him NBA-ready three-point range and the innate ability to lead a game down the stretch, an attribute likely attractive to Kings management with the lack of proven finishers. Sacramento enters close-game situations as much as any team in the league, and Stauskas’ catch-and shoot ability at either the point or shooting guard position is a necessity with Isaiah Thomas’ uncertain future with the Kings. However slight the possibility of Thomas leaving the team may be, it doesn’t hurt to have a replacement just in case.

Stauskas shot an efficient 46.7 percent from the field in his 2013-14 season, using his leaping ability to shoot over collegiate defenses. It’s a skill which will likely translate to the professional game as a result of his 35.5-inch vertical leap, a surprising measurement considering his non-athletic build.

Sacramento decided to address its perimeter shooting deficiencies with this pick, clearly noted by passing on Noah Vonleh. Sacramento finished 27th in three-point shooting in the 2013-14 season, so Stauskas’ priority assignment is to provide a reliable catch-and shoot option alongside Ben McLemore. In fact, the team seems confident that the two shooters will fair well alongside each other, no matter how fierce the competition for a starting spot may become.

“I think I can play multiple positions. Moving forward in the NBA I think I can play a little bit of one and also the two,” Stauskas said. “I know this team has struggled shooting the ball, and obviously that’s the best part of my game, so knocking down shots and spreading the floor is definitely something I’m excited to do for this team.”

The Kings have already expressed long-term interest in Stauskas to media, with no plans of dealing him in the foreseeable future. He’ll likely split minutes with McLemore and provide some backup minutes at the point guard position. If Thomas elects to leave Sacramento, Stauskas could fall into some heavy minutes and a possible starting position at point.

If Thomas is a King for the 2014-15 season, McLemore’s standing on the team becomes questionable. With the flurry of trade rumors all revolving around him, the Kings may have selected Stauskas as a future replacement for McLemore, who could be dealt at any moment before the deadline.

That said, the Kings may very well be considering a long-term plan with both shooting guards playing in concert, growing together to create a back court combo as Stauskas can also play the point guard. How immediately the team values winning will determine whether or not Stauskas and McLemore will play together or separately, but all signs are hinting that both will see minutes together.

“We would like to see them [play] together. Nik is such a playmaking type of combo guard and we can actually see them on the floor together,” D’Alessandro said. “As we see Ben advance defensively which we fully expect because of his athleticism, we fully expect to see him guarding the one. [We see] them playing together.”

This Kings team addressed one if its biggest flaws by selecting a pure shooter who can stretch the floor to give DeMarcus Cousins room to work in the post, but may have passed up on what may be the best power forward in the draft in Vonleh.

“He’s a great shooter, arguably the best shooter in the draft. He can play the one or the two, and we’re delighted to have him on the team,” Vivek Ranadivé said.

Stauskas will arrive in Sacramento June 28 to meet team management and begin his career with the Kings.