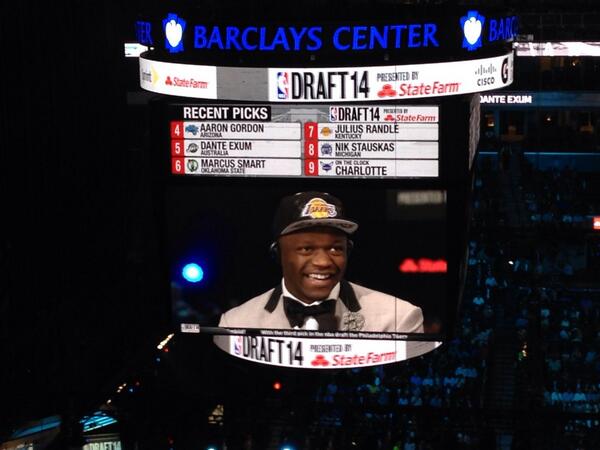 Early Thursday evening I was on the phone with my girlfriend and she made the mistake of asking me what I was planning on doing the rest of the night. She proceeded to sit there on the phone for the next 200 seconds and listen to me blabber on about the NBA Draft. She handled it like a champ, but responded by saying, “I don’t get why you’re so excited about this. It sounds really boring. But I’m sure you’ll really enjoy it.” That’s my girl! Always totally blunt, but she knows me all too well. She was absolutely correct. As I watched arguably the most loaded NBA Draft in at least a decade unfold for five straight hours, not only was I enjoying it, but I was also having a hard time identifying any teams that obviously screwed up.

Five or 10 years from now we’ll be able to see more clearly which teams struck gold and which teams miscalculated on their picks. For now, my prospective “Winners and Losers of the NBA Draft” column is out the window. Maybe it’s because I am so giddy right now, but I was only able to find three losers in the 2014 NBA Draft.

Oklahoma City Thunder
The Thunder twice passed on two of my favorite mid- to late-first round gems, Cleanthony Early and Kyle Anderson. Instead they took Mitch McGary with the 21st pick and Josh Huestis with No. 29. McGary probably could’ve been chosen with the 29th pick and Huestis was certainly a second-round talent. Perplexing all the way around. Oklahoma City needs guys that can consistently put pressure on opposing defenses who aren’t named Durant or Westbrook. Any non-Thunder fan’s worst nightmare was that Oklahoma City was going to land someone like T.J. Warren or Cleanthony Early with one of those two picks.

Toronto Raptors
As a Connecticut Huskies fan, I was partial to the Raptors second round selection of DeAndre Daniels, but taking Bruno Caboclo with the 20th pick was one of the most perplexing decisions I can remember in NBA Draft history. I was more confused by that pick than I was watching the last two seasons of Lost. Not only did I not know who Caboclo was, I don’t think Jay Bilas, Jalen Rose or Bill Simmons did either. I don’t care how much he knows about international basketball, when Fran Fraschilla is the only ESPN employee who knows about an international player, it’s not a good thing. But hey, when you can pick a guy who Fraschilla described as being “two years away from being two years away,” you have to do it. My head is still spinning.

Minnesota Timberwolves
I was lukewarm about Zach LaVine before the draft even began and the look of complete disdain on his face after being selected by Minnesota with the 13th pick didn’t help his cause. The look on his face was more “I just saw my girlfriend cheating on me with Adam Silver,” than “Adam Silver just announced that I’m now officially an NBA player.”

Anyway, I’m tired of being negative. It’s really messing with my giddiness. Let’s take a look at the winners of the 2014 NBA Draft.

Andrew Wiggins
His name is added to the list of No. 1 picks and that automatically qualifies him as a winner. I love Wiggins’ upside and think he’ll be a lot better than most people do. Cleveland is a nice fit too. The Cavs don’t need an alpha dog that needs the ball in his hands every possession. They need a guy who can defend on the perimeter and finish on fast breaks and get fans out of their seats. They got that guy in Wiggins. And even if he doesn’t pan out (unlikely), we’ll always remember him fondly for the amazing floral-print tuxedo he wore last night.

Marcus Smart and Julius Randle
For the heck of it, we can go ahead and throw the Boston Celtics and Los Angeles Lakers into this mix too since they drafted two of my top six players in this draft class. Smart and Randle are both going to big markets and storied franchises that typically don’t go through prolonged periods of irrelevancy. And given how impactful each can be early on, I doubt that either team will remain irrelevant for very long. Both will be expected to come in and contribute right away, and I don’t see it being a problem for either. Both Smart and Randle are physically ready for the NBA and they both are wired the way you would want the building blocks of your franchise to be.

Miami Heat
Maybe from an X’s and O’s standpoint the trade to acquire Connecticut point guard Shabazz Napier doesn’t make a ton of sense, or seem like a franchise-altering move in and of itself, but it accomplishes one thing that is far more important than any uninformed NBA fan would realize: it appealed to highly coveted free agent LeBron James, who has on multiple occasions alluded to a desire to play with Napier.

My favorite player in the draft! #Napier

New York Knicks
I can’t remember a time when the Knicks fans in attendance at the NBA Draft approved of their team’s selections. Tonight New York improbably went two-for-two, hijacking Early with the 34th pick and then picking up hard-to-pronounce-and-spell Thanasis Antetokounmpo, also known as Greek Freak’s older brother, at No. 51. I thought that the only history being made in the 2014 Draft would be when Toronto picked Bruno, but I was wrong. New York made two good draft decisions. The Phil Jackson era is alive and well!

Jay Bilas
Not many people are as good at what they do as Bilas is covering the NBA Draft. He was on point all night, quick to deliver witty insight on every player mentioned and as usual, he even worked in a few well-timed references to the Jay Bilas Wingspan drinking game. He slayed me when he came with the “I’m a little bit thirsty… he’s got a terrific wingspan” line during his Zach LaVine breakdown.

The Chicago Bulls-Denver Nuggets trade
One of the rare draft night trades where it appears both teams came out winners. Chicago flipped its 16th and 19th picks for Denver’s 11th pick, Doug McDermott, who could be just what the doctor ordered for that anemic Bulls offense. Denver used the two aforementioned picks to take Jusuf Nurkic—who looked like a Nikola Pekovic-Marc Gasol hybrid in the grainy highlight videos we saw of him—and Gary Harris, who inexplicably fell to No. 19. Overall, both teams came out winners. Seriously, that never happens.

Canada
Three Canadians were selected in the first 18 picks. This isn’t hockey. What the hell is happening? We’re being invaded by Canada! This is turning into South Park: Bigger, Longer & Uncut all over again, minus Terrance and Phillip, Saddam Hussein and all of the musical numbers.

Phoenix Suns
There were rumors that the Suns wouldn’t use all of three of their first round picks, but they did and though I was only high on one of them, it was good enough to chalk them up as winners. The Suns grabbed TJ Warren with the last pick in the lottery, higher than most had him projected to go but right where he should’ve went. Warren not only led the ACC in scoring last year, but he also led the conference in field goal percentage. He’s a small forward that took 18 shots per game and was the only true scoring threat on the team. How the hell wasn’t he expected to go in the lottery? If Warren comes in and scores 20 points per game I can’t say that I would be totally shocked. Even though Warren is the only immediate contributor I see from Phoenix’s draft, they stockpiled even more assets, making a potential Kevin Love trade all the more intriguing. Hey, speaking of stockpiling assets …

Philadelphia 76ers
The Philadelphia 76ers did just that, picking Joel Embiid with the third pick, swapping picks with the Orlando Magic and stashing away Dario Saric—and getting Orlando’s 2017 first round pick in the process—and then making five picks in the second round of the Draft. They did well enough by selecting Embiid third overall; he would’ve been the top pick had those foot and back issues not scared the Cavs away. Philadelphia is going to stink next season and that’s okay. The 76ers clearly don’t have a problem with this and neither should we. Who are we to judge if they want to tank again. In five years they’ll probably be a playoff team and we’ll forget about the fact that they lost 26 consecutive games during the 2013-14 season.

Admittedly, I’m a sucker for Danté Exum. I buy into his “Penny Hardaway 2.0” comparisons. I even buy into his “young Kobe Bryant” comparisons, and I definitely enjoyed his Adidas commercials a little too much. I love the guy and had him third on my imaginary draft board heading into tonight. The Exum-Trey Burke duo makes Utah a little frisky and their selection of Rodney Hood at No. 23 was met with a little hesitation on my end until I considered that Hood was projected to be a top-10 pick for a few months leading up to tonight. If anything, Hood can be considered Gordon Hayward insurance.

San Antonio Spurs
Instead of gushing about how much I enjoy Anderson and ranting about how he went way too low in the draft, I turned to my resident San Antonio Spurs expert, my cousin Gianni, who has been a Spurs fan since Tim Duncan came into the league in 1997. Gi’s response:

“Yes! That is awesome. And this why the Spurs are so much better than everyone else. Now he just needs Boris to take him under his wing and feed him some baguettes and crepes … fatten him up a bit.”

Adam Silver
Silver is super classy and incredibly well-spoken. He handled the Donald Sterling controversy flawlessly and tonight delivered one of the all-time great NBA Draft moments when he announced the NBA had selected Isaiah Austin. Such a touching scene. Maybe the reason I am so giddy right now is because the league is not only in the very capable hands of an incredible amount of talented players, but also in those of Silver, who despite being only 150 or so days into his tenure as NBA Commissioner, is already proving to be one of the best professional sports commissioners of All-Time.