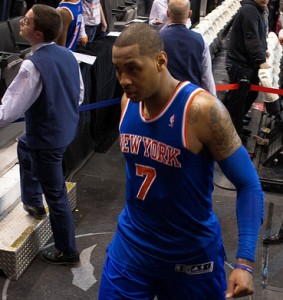 “Expectation is the root of all heartache” – William Shakespeare

How did this happen?

How did a collegiate national champion who led the NBA team that drafted him as far as it has ever been in its history, develop a reputation for not being a winner?

How has maybe the greatest Olympian in USA basketball history become known as a disappointment?

How did it happen that a scoring savant who is easily on path for a Hall-of-Fame career has accrued so much negative press and critique of his game—to the point that mediocre players like Arron Afflalo or Jimmy Butler receive more praise on a regular basis—that he has become one of the most underrated athletes in all of sports?

This is not an ambiguous claim.

During his career, Carmelo Anthony has ranked outside the top 10 and even once outside the top 15 regularly on yearly ESPN top players lists. I have broken down the following players—each of which have at one time or another been rated higher than Melo as players in the eyes of the worldwide leader—into the following categories:

Why are these guys immune?: Chris Paul, Dwight Howard

We’ll get back to each of these players at appropriate times and do a final comparison at the end. One thing that Carmelo Anthony has had more of than maybe every single guy outside those top three categories: expectations.

According to Basketball Reference’s Hall-of-Fame index, Carmelo is 12th among active players in likeliness to be elected to the hall behind a lot of soon-to-be-retiring greats like Ray Allen, Tim Duncan, Kevin Garnett, and Paul Pierce, and ahead of Steve Nash, Vince Carter, and Dwight Howard.

Carmelo Anthony ranks 63rd on the all-time list ahead of Gary Payton and John Stockton.

If Melo scores as many points in the next eight years as he did in his first eight years (unlikely I know, but still) he will end up with 37,922 points. This would put him right behind Kareem Abdul-Jabbar and about 1,000 ahead of Karl Malone for second place, though he will also be behind LeBron if he maintains pace.

Even if he only scores half as many points in the second half of his career as he did the first, Anthony will end with over 30,000 points and may also reach 10,000 rebounds and 4,000 assists.

If he accomplishes this he will join a rare group of only Abdul Jabbar, Karl Malone, Wilt Chamberlain and very likely LeBron James. Few would put Melo in a category with those players.

Dirk Nowitzki also has a shot at this club, but needs almost 3,300 more points, 500 more rebounds, and 800 more assists.

I recently had a conversation with a member of the SBNation Denver Nuggets community known as Denver Stiffs about the conundrum of Carmelo Anthony. We had regularly sparred on this conversation over the magic of the interwebs but when we first met in person and I confronted him on the topic he offered me a lucid proclamation. “Carmelo,” he said, “should have been one of the 10 greatest players of all time.”

“Oft expectation fails, and most oft there
Where most it promises.”

Bill Simmons wrote once that Carmelo Anthony was “built by God to play small forward in the NBA” and nothing has changed from that moment to this one.

But his career thus far is defined by “what if?” and “why not?”

He has the rest of it to determine whether or not he goes down ultimately as the very best version of Tracy McGrady and Vince Carter—a great scorer defined by lack of playoff success—more of a Charles Barkley or Clyde Drexler—an unquestioned all-time great who is remembered for never winning the big one—or if he can be something more.

One championship, and he may go down as a better version of Dirk. Two or more and his overall stats could carve out a place for him that would surprise many who have been spouting nothing but his flaws for his entire career. Might Melo be a top 20 player of all time when it is all over?

Now, Carmelo Anthony will be (BLANKING) his talents to (BLANK) but in order to think well on what his future may hold we must understand the intricate ironies of his past.

Basketball experts have diametrically opposed opinions on Carmelo Anthony: is he an overrated, “me first” one-dimensional player who will never be the leader on a championship team? Is he an underrated, mostly unfortunate, and unfairly criticized (and refereed) once-in-a-generation talent who has been held to an absurd standard? Title or bust.

Is it possible all these scenarios have lies and truth in them?

There was the championship in college and a corn-row kid, there was the clutch and the kicks, and “the purest scorer in the game.” There was the smile, there was “stop snitchin’,” there was Iverson and “Mr. Big Shot” and showdowns with Kobe. There were clashes with Karl, trade rumors, Melodrama, and a return home to the city that never sleeps. There were questions of meshing and suggestions of “quitting” and there were two inbound passes … those two dammed inbound passes. And it isn’t even over yet.

He was built by God to score, and he has obliged.

But was he built to win championships?

I was born in a western Colorado desert town to two Jayhawks. If you don’t know what a Jayhawk is, it’s a person whose soul is in the shape of a basketball. Both of my parents being University of Kansas alumni, the game naturally danced across our living room screen in images that still come to me in my dreams.

When I was a kid, the Denver Nuggets were terrible. Like, really, really bad. Because of that and the fact that they were never on TV—and because I liked that Chris Webber seemed to always be having fun—the first NBA team I ever considered myself a fan of was the Sacramento Kings.

You remember that team: Webber, Vlade Divac, Hedo Turkoglu, Peja Stojakovic, Mike Bibby, Jason Williams, Bobby Jackson. Rooting for them more or less prepared me for what was to come as a Nuggets fan during the Carmelo era.

More than that, though, as a family we rooted for the Jayhawks and in 2003 they were in rare form. Kirk Heinrich and Nick Collison led a team of excellent defensive play and fundamentals combined with perfect executions of the fast break. I watched them in awe as they mowed down the competition with ease on their way to the finals.

And then this skinny-ass punk owned us; just complete and utter domination on both sides of the court. It was incredible. I was a freshman in high school and this felt like a light-switch moment. It was the moment I began to analyze basketball, and Carmelo Anthony was my teacher. Lesson No. 1: how to take apart a defense and put the biscuit in the basket.

As he cut the nets down after dismantling a very good team, a play-by-play guy speculated about his draft stock and was convinced he would go to the Denver Nuggets.

I had to watch this draft.

We might get that guy? He can score from anywhere.

They had new jerseys, new colors, a new logo, a new TV deal, and a new star.

As a 19-year-old, Carmelo averaged 21.1 points per game, leading his team by more than six points. Six games into his career he became the second-youngest player in NBA history (Kobe Bryant) to grab 30 points in a game. He was already a scoring machine on the NBA level.

Melo was voted Western Conference Rookie of the Month every month of the season (a feat matched by only David Robinson, Tim Duncan, and LeBron James in the East) and got the Denver friggin’ Nuggets into the playoffs.

Anthony became the first rookie to lead a playoff team in scoring since David Robinson.

Thus began a feud with a nemesis from which he could not yet imagine the frustration he would endure: the first round.

In what seemed innocuous, obvious, and expected at the time, Carmelo Anthony and the Denver Nuggets were handily dismissed in five games by the first seed Minnesota Timberwolves featuring a prime-of-his-career Kevin Garnett and a prime-of-his-looking-like-an-alien Sam Casell.

While LeBron James was sitting at home, Carmelo Anthony had already started contributing to a stat that would come to haunt him. 0-1.

The next season, Melo’s numbers mostly maintained but the Nuggets improved upon their record by six games for a total of 49 wins. Despite the fact that this would have bested the Boston Celtics who got the third seed in the East that year, the Nuggets record was only good enough for the seventh seed in the powerhouse West.

LeBron James missed the playoffs again even while playing in the much weaker conference, losing out to the final throws of the Jason Kidd, Kenyon Martin, Richard Jefferson, and Jason Collins New Jersey Nets for the eighth seed.

Had Carmelo’s team been playing in the East they would have been paired against an Indiana Pacers squad hobbled by the aftereffects of “The Malice in the Palace.” Instead they were matched against the eventual champion San Antonio Spurs in the first round (not the last time this would happen) and lost in five games for the second year in a row.

Kobe Bryant, without Shaquille O’Neal or Phil Jackson, joined LeBron James on the couch during those playoffs as did first overall pick Dwight Howard. Carmelo Anthony was the best player on a team that took Game 1 in San Antonio against the eventual champs. 0-2.

If Melo had been drafted into the Eastern Conference he would almost certainly have been to the second round twice already and talking heads would lose their favorite Melo blemmish to bash.

That year also saw the release of the now infamous “Stop Snitchin'” video that seeded the reputation in the minds of many of Carmelo Anthony the “thug.” Despite the fact that this was the very definition of guilty by association—Melo did nothing wrong but was seen with someone talking about doing something wrong—many in the public would never turn back from this moment, combining it with his tattoos and corn-rows to complete the narrative.

It was also a convenient case of collective conscious laziness, as the national media and basketball fans needed to paint Carmelo in contrast to the golden boy LeBron James. In some ways, this is still happening both with their personalities and their games.

The next year would see both players reach new heights in their careers. James would finally make the playoffs and Anthony would become statistically the best clutch player in the NBA (yes, even over Kobe) but it would all get really, really weird.

Odd circumstances, a brawl, and a trade for all-time great Allen Iverson on the next episode of this complete look into the career of Carmelo Anthony.