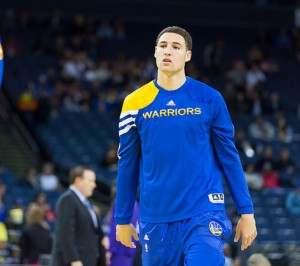 It’s no secret that Klay Thompson’s name has been floating around in numerous trade rumors this offseason. Even new head coach Steve Kerr has made public comments on the matter, telling The Bay Area News Group:

“They both get it. I told them, ‘I know you get it. It doesn’t make it any easier.’ But this is why you really get paid. I mean, you get paid all this money, is it really for coming into a gym for two hours a day and shooting jump shots? We’ve been doing that for free our whole life, you know? You get paid because you can get traded, and you have to uproot your family. You can get hurt, you can get booed, and people on the message board are crushing you. That’s where you actually earn your money in this league, where it actually feels like work.“

But whether or not Thompson will or even should be traded remains to be seen. The obvious trade link has been with the Minnesota Timberwolves in exchange for All-Star forward Kevin Love. There are mixed emotions across the board within the Bay Area regarding the matter. Dare Golden State break up the Splash Brothers? What about the team’s chemistry? Well, it’s obvious that the Warriors front office isn’t the slightest bit worried about chemistry after ousting head coach Mark Jackson even though he led the Warriors to a 51-win season and consecutive playoff berths for the first time in over two decades.

With that being said, the firing of Mark Jackson and the hiring of Steve Kerr is exactly why the Warriors shouldn’t be so quick to pull the trigger on the Thompson/Love deal. Mark Jackson struggled to surround himself with the right personnel to help him make the appropriate coaching decisions, leading to poor game and roster management at the absolute worst times. With a fresh head coach that learned from the greatest of all time, Phil Jackson, and was the GM of one of the most exciting, uptempo teams of all time, the Phoenix Suns, why not wait and see just exactly what Kerr can do with the current roster? He came to the Bay Area for a reason, now let him roll the dice.

Kerr, with Alvin Gentry and Luke Walton as assistants, will incorporate the triangle offense and push the ball down the floor. When the Warriors can get out into transition they are lethal because of the Stephen Curry/Klay Thompson duo. When they are at their best, their tough defense leads to quick, deadly offense. And let’s face it, Kevin Love isn’t a tough defender, nor is he quick. What Mark Jackson brought to the team was a confident, tough, physical, defensive mindset. The Warriors cannot forget that. They need to stick to their roots and always remember what brought their franchise back from the deepest, darkest depths of the league. However, they must build off that and grow into an offensively efficient machine as well.

Something that Kerr has made clear is that he wants to get both Andre Iguodala and Harrison Barnes more involved offensively. Last season’s addition of Iguodala truly stunted Barnes’ growth. Jackson never put him in a comfortable position. Barnes showed how valuable he could be two postseasons ago when he played significant minutes at the stretch 4 position due to David Lee’s injury. But for some unknown reason, Jackson never again went back to that look. Instead, he attempted to run the second unit through Barnes—an attempt that failed miserably and caused Barnes to lose all confidence.

Barnes thrived alongside Curry, Thompson, Lee, and Bogut in his rookie season because the pressure was off him. With the offseason additions of Shaun Livingston and Brandon Rush and the emergence of Draymond Green, Barnes will have a better opportunity to shine with the second unit as well as the ability to once again play alongside Curry and Thompson.

Golden State is a young team that has already showed perseverance and battled through adversity. To break the core of this roster up now would be a mistake. There is no doubt that Kevin Love is a great player and an upgrade over David Lee, but who replaces Klay Thompson not only offensively, but more importantly, defensively? Klay has the unique ability of defending three different positions. He gives Curry the luxury of not having to guard a Chris Paul or a Tony Parker every possession of every night. Is the front office willing to trade defense for offense? They shouldn’t be so quick to pull the trigger.

Let Kerr roll the dice with what brought him to the Bay.