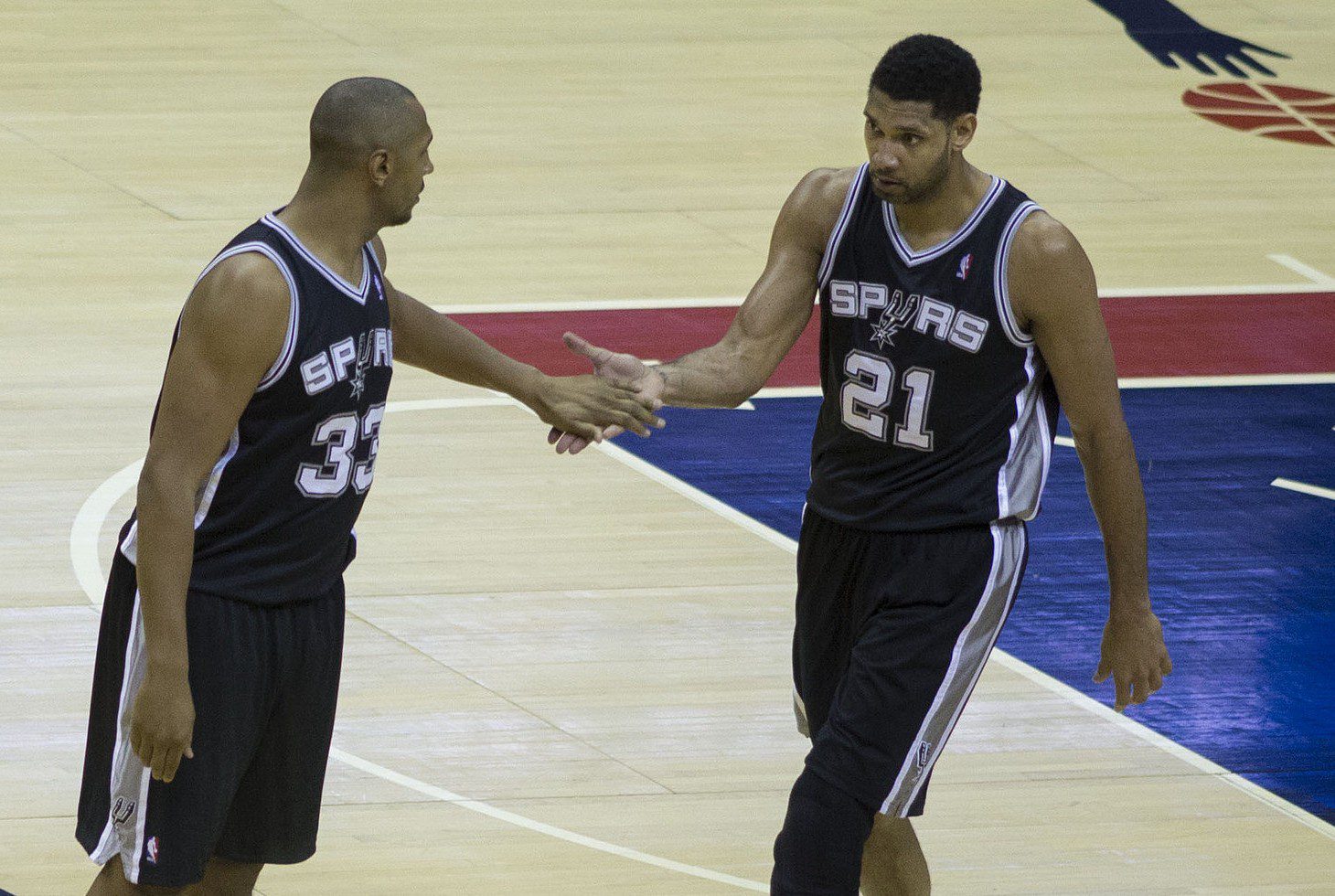 Still though, the NBA never stops being interesting and thus there are plenty of questions at any given time that can be addressed. I’m the man with all of those answers. Let’s get after it!

Should the Los Angeles Clippers boycott the season if Donald Sterling is still in the picture?
That’s not for me to decide, but could you really blame any individual within the Clippers organization if they didn’t want to work for the racist, ignorant, out of touch buffoon of an owner that is Donald Sterling? Hell, could you blame anyone in any profession for not wanting to work for a royal jerk like Sterling? I know I couldn’t. If I was in Chris Paul or Blake Griffin or Doc Rivers’ shoes, I’d be more inclined to conspire with Dean “Motherf*****” Jones than to make Donald Sterling another cent.

It’s a tough situation, though. The NBA seems to be doing all it can to force the sale of the team from Sterling to ex-Microsoft CEO Steve Ballmer as soon as possible. Shelly Sterling is doing her part in agreeing to sell the Clippers. Ballmer is doing his part, attempting to pry the team away from the evil Donald. The Clippers players and coaches are doing their part in saying and doing all of the right things. Everyone but Donald Sterling is doing the right thing. Even V. Stiviano and her goofy looking Daft Punk visor are finally staying out of the limelight.

This is a Donald Sterling issue, and if he’s going to spend the rest of his days fighting the NBA for the Clippers — as he said he would — then I don’t have a problem with the Clippers players not stepping on the court. Has any one individual done more damage to the NBA than Sterling? Tim Donaghy maybe? Coke dealers in the late 1970s and early 80s perhaps? That’s the short list. Sterling’s comments were a black eye for the league, but under the leadership of NBA Commissioner Adam Silver and Doc Rivers, the league got through it and look pretty damn good coming out on the other side.

Still, the NBA needs to find a way to permanently put Donald Sterling in the rearview mirror. The impending sale to Ballmer is a good start. A name change could be the next step. I like the Los Angeles Silver Stars, a nod to Commissioner Adam Silver and a not so subtle “Eff You” to Sterling, who was banned for life by Silver. And after that, just let Chris Paul, Blake Griffin, Doc Rivers and company do what they do best. They’ll be fine. Better than that other team in Los Angeles, although to be fair, as long as Sterling is at the forefront, not many free agents will likely want to make the Clip Joint a destination.

Are the Los Angeles Lakers done being a glamorous free agency location?

Have they done anything in the last fifteen years to convince me to think otherwise? Really, since signing Shaquille O’Neal in 1996, what “stars” have the Lakers brought in during free agency? Karl Malone in his mildly depressing final season? Gary Payton in the twilight of his career when he was more of a “Mitten” than a “Glove”? Am I missing anyone?

Forgive me if I don’t jump at the opportunity to file Nick Young, Ed Davis and Carlos Boozer under Big Time Free Agency Acquisitions For The Lakers, a group that’s been waiting for a new member since I was in pre-school. One of the most prestigious franchises in all of professional sports should be bringing in bigger names than that and it definitely seems like they should’ve been able to avoid the state of backwardness they are in right now.

Ever since Phil Jackson left the Lakers, they haven’t really been the Lakers. The big moves Los Angeles made during the summer of 2012 crashed quicker than Oceanic Flight 815 did and was lost. Steve Nash was traded to Los Angeles, only for the Lakers to find out that he had become seven levels beyond washed-up seemingly overnight. A year after trading for him, the Lakers lost Dwight Howard to the Houston Rockets. They threw all kinds of money at Carmelo Anthony this summer and he turned them down, even saying afterwards that it was always between the New York Knicks and Chicago Bulls. LeBron James never even entertained the idea of going to Los Angeles this summer. The Lakers couldn’t even keep Pau Gasol around.

Who does that leave to blame? Kobe Bryant and his albatross of a contract haven’t helped the matter. Neither has Jimmy Buss, but nobody would be too shocked to hear that. The real problem is big name players don’t need major markets to be marketable anymore. It’s not the 1970s, where unless you were playing in Boston, New York or Los Angeles, people didn’t care about you. LeBron James was the most well-known and marketable player in the world when he was playing in Cleveland, then left Cleveland and has now gone back to Cleveland. He doesn’t need Los Angeles. Carmelo Anthony didn’t need Los Angeles. Neither will Kevin Love or Kevin Durant when that time comes. Hey, while we’re here…

Is Kevin Durant going to leave the Oklahoma City Thunder as a free agent in 2016?
Similar to LeBron James’ situation in both Cleveland and Miami, I think it depends on what kind of success Durant has for the next two seasons in Oklahoma City. Had LeBron James won a title in Cleveland in 2009 or 2010 I don’t know that the Miami experiment even takes place. Had the Miami Heat defeated the San Antonio Spurs in the NBA Finals a month ago, then LeBron probably isn’t taking his talents back to Cleveland just yet.

It’s totally plausible that Durant would consider a change of scenery in 2016. There will be no shortage of suitors lining up to spend outrageous amounts of money — it will be even more outrageous than many people realize, thanks to a new television deal that could help the NBA salary cap increase to around or over $100 million — on the reigning MVP. Over the next two seasons, teams will jockey for position to be able to make the most appealing offer, both financially and roster-wise, to Durant. And if things are rocky in Oklahoma City, Durant might be listening.

Let’s assume the Durant/Russell Westbrook relationship takes a Shaq/Kobe turn, with Westbrook assuming the role of Kobe Bryant circa 2004 and believing he should be the top dog in Oklahoma City. On top of that, let’s say Scott Brooks remains an occasionally incompetent head coach, Serge Ibaka doesn’t develop into anything more than he currently is, the James Harden trade continues to look horrible and the rest of the roster never takes shape. First, we can agree that this made-up scenario isn’t implausible. If you were a relatively large individual and chose to go out on a limb with a prediction like that, you wouldn’t be overly concerned that the limb would snap. You’d feel safe up there, especially if the Washington Wizards — the closest thing to a hometown team for Durant — play their cards right the next two years. Then you might as well build a tree house up there and deck it out with old school Washington Bullets memorabilia.

What was the most “under the radar” Western Conference free agency signing?
Kudos to the Portland Trail Blazers for fixing up a bench that has been one of the least productive in the NBA the last two seasons. Under normal circumstances Steve Blake (two years, $4.2 million) and Chris Kaman (two years, $9.8 million) aren’t major chess pieces, especially in the Western Conference, but the Blazers bench was sooooooooo bad that bringing in any guys who can contribute at all is progress. The Blazers were a five and a half man team last year and won 54 games. If that number is bumped up to eight, Rip City might be a little frisky.

What Western Conference Playoff team might fall out of the playoffs this upcoming season?
Ask me about the Rockets and you’ll see that I’m noticeably dubious. The last two offseasons they’ve been able to make their splashy moves, and this year they struck out on all of the big names. They let Chandler Parsons walk, and instead gave $32 million to Trevor Ariza over four years, even though there are probably seventeen other “Trevor Ariza”s out there. There is absolutely no frontcourt depth behind Dwight Howard, an eleventh year center with a back surgery in his past.

The elephant in the room for Houston is the Dwight Howard/James Harden dynamic, which is about seven months away from being as icy as the town in Frozen. Sure, right now they’re on the same page and calling the other 13 guys on the team “role players,” but that has a shelf life. Eventually the battle for alpha dog status will begin and it won’t be pretty… literally, it won’t be pretty. When the Rockets offense turns into a competition between Harden iso-ball and ugly Dwight Howard jump hooks, look the other way.

Why hasn’t anyone replicated what the San Antonio Spurs do?
Because there are owners like Donald Sterling who do way more harm than good. Because there are decision makers like Jimmy Buss who dish out massive contracts to 35 year olds who are coming off Achilles tears. Because there are coaches like Scott Brooks who never, ever make adjustments. Because there are teams like Portland who strike out on role players or completely ignore the importance of a bench altogether. Because teams like Houston are “led” by guys like Harden and Howard, who demean their current teammates and take subtle shots at their former ones, and will eventually be at each other’s throats. Don’t get caught up in the idea that the Spurs are getting old or that their time has passed. Their time is now, thanks to their own brilliance and the incompetence of others.