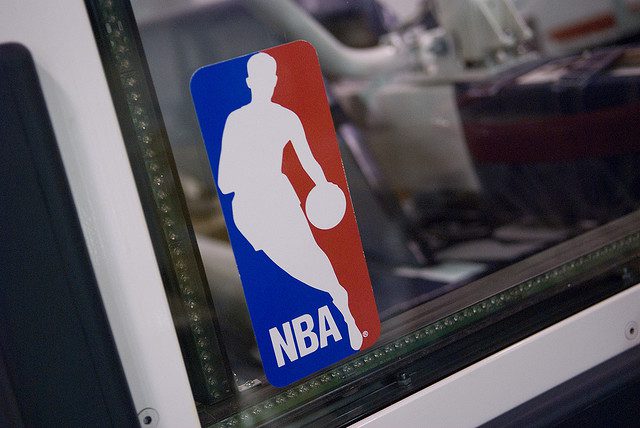 I’m always a little shocked at the excitement garnered by the released of the NBA regular season schedule. Everyone is going to play everyone at least twice so the manufactured intrigue always feels weird. The curated lists talk about the best match ups of the season, yet they only feature superstars and big markets. Let’s have more fun than that. I’ll pick out some goofball things to look out for this season in ten different games. You, the reader, can participate as well by sharing any goofball occurrences in the regular season schedule with #goofballNBA.

Oct 28: HOU @ LAL – The Dwightmare returns, Part II #goofballNBA This is an example tweet. Pay me no mind.

What are you waiting for? Get your #goofballNBA tweets out there so we can laugh at this absurdity together.

The favorites in the Eastern Conference battle it out for the first time in the second game of the season for each team. LeBron James, best player-head coach-general manager-part owner of the Cavaliers, will the charge against their stiffest competition. Will Derrick Rose even be playing at that time?

These two division rivals couldn’t play much different from each other on the offensive side of the ball: an inside-out, barely about to score before the shot clock expires offense versus a running, high-scoring behemoth that few teams can slow down. Kevin Durant has likely worked on some new moves for small players to address the criticism he received in the 2014 playoffs when Tony Allen demonstrated a defensive basketball Kung-Fu grip.

The clock could be ticking on both teams to win soon with Marc Gasol, Kevin Durant, and Russell Westbrook having contracts that end in 2015, 2016, and 2017 respectively. Rivalries come and go and this has been an underappreciated battle for the last four seasons. I’ll be sad when these incarnations of the two teams are no more.

Jason Kidd, head coach of the Milwaukee Bucks, returns to the Barclay’s Center for the first time since wiggling his way out of Brooklyn into a cozy nest with the Bucks. The true reasons behind Kidd’s power trip with the Brooklyn Nets are unclear. Given his history, that’s probably for the best. At least we get to see a great matchup between Jabari Parker and Paul Pi … oh wait, Pierce left to join the Wizards. This game is still worth watching to see if Jason Kidd has any more tricks with water.

Maybe he’ll use a 20-ounce bottle this time!

Welcome to the tale of two teams with too many guards!

Three of the top five players on both teams are 6’6″ or under which should make a for a diabolical brew of Who Do We Blame For This Bad Plan?

Watch a professional basketball abomination as two different teams make no excuses for their bad defense, and erratic team chemistry as a consequence of too many guards who need the ball in their hands. Make no mistake, this will be entertaining.

The Minnesota fanbase is the but the latest victim of the superstar who leaves for nothing because the general manager is trading like he has a gun to his head. By January 31, the frustration will be at an all-time high with another losing season, an overwhelmed Andrew Wiggins, and the realization that Flip Saunders, the man who made all of this possible, is not going anywhere. Minnesotans don’t take this kind of mess lying down! They are going to show Kevin Love their anger, their fervor, their all-out disgust!

I don’t actually recommend watching this game. It’s going to suck. Just come read some Baller Mind Frame columns on why Love is a jerk or a saint. We haven’t picked a side yet.

This is the first game between the Blazers and Rockets since last year’s classic playoff series. Both rosters are mostly the same sans Chandler Parsons. The teams are not true title contenders but they are on the ballot for the Fun Hall of Fame. Audiences will always get a fun game from this matchup so it’s a must watch even for casual basketball fans. Also, we get to see James Harden’s horrible defense versus on of the best backcourts in the league. Witness the drama of two aging, hall of fame shooting guards in their final form as shells of their former selves after grinding through more than 50 games of the regular season.

Forget the record of the teams! All highlights will be about Kobe and Dwyane.

Two of the worst teams of the 2013-2014 season vie in another tightly contested race to see who can secure the better chances to win the 2015 NBA Draft Lottery.

By grossly overpaying Avery Bradley and drafting Marcus Smart, the Celtics have made it clear that Rajon Rondo is on the trading block. Rondo’s contract expires this year and Celtics’ general manager Danny Ainge is unlikely to let him go for nothing. The Celtics are hoarding enough picks to legitimately draft for three different teams. Trading your only blue chip talent, stacking picks, and tanking to get better picks is cute but doesn’t seem like a sound plan.

The 76ers are following the same template. Their last two lottery picks were players who have agreed to forego their season due to injury. Nerles Noel wanted to play, but the 76ers asked him not to. The same will happen to Joel Embiid who is only supposed to be out 4-6 months, but will be asked to continue rehab to ensure he is healthy.

Tanking matchups make for the best drinking games. How many fans will be in attendance? How long will the starting lineup play? Does the coach bother to stand up to coach the team? Which medicore player on an expiring contract will take the most shots to pad his stats?

Find out yourself during this epic event.

Two roads diverged by the playoffs,

Charlotte, happy to not travel one

Indiana, one traveler, long they stood

And looked down the other as long they could

To where it bent in the undergrowth;

Then took the other, not as fair

That is just a segment of an augmented version of Robert Frost’s The Road Not Taken that I made up in 60 seconds. In case that ragtag idea was not clear, the Bobcats are on the rise while the Pacers are figuring out how to tank without taking a PR hit. The Pacers were in big trouble even before Paul George’s season ending injury primarily because the front office elected not to pay Lance Stephenson who would eventually sign with the Bobcats. Do you think Stephenson forgot about that? Of course not. He’s going to show off as much as he can the games of the season versus the Pacers in Indianapolis.

Like it or not, Born Ready is here to stay. Realistically, the Bobcats can get the three seed in the East with 46 wins. That’s not a hard ask. As for the Pacers, the Emmanuel Mudiay sweepstakes have begun.

October 30 to April 14: Everyone at Los Angeles Clippers

Tune in to all 41 Clippers’ home games so you can see official owner emeritus/#1 fan Shelly Sterling sitting courtside! Look the other way as she impersonates a health inspector!

Rally with her as she brings down NBA sexism!

And cheer as she acts in good faith against her husband while simultaneously netting $1 billion from sale of the Clippers to Steve Balmer!

Bring the whole family! And remember, nothing can be proven unless it’s in or on the court!