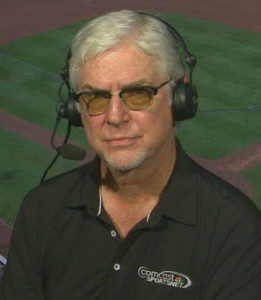 Mike Krukow is not a happy camper.

And once upon a time, fans didn’t drink themselves into oblivion while watching the former World Series champs’ bats go softer than Michael Sam at the Playboy mansion in only in a short amount of time. Both the defense and offense found themselves in the Bermuda Triangle of the MLB when drifting out of May and into the dreaded month of June (gloom) and it showed in their performance, which most likely gave fans vivid flashbacks of their atrocious 2013 season where they finished fourth in the NL West with a 76-86 record.

But, oddly enough, this wasn’t the case Tuesday evening when the Giants faced off against the Chicago Cubs at Wrigley field. When the game kicked off two minutes off schedule at 7:07 central time, a post apocalyptic glow hummed through the sky, allowing only pieces of the light purple and reddish glimmer of dusk to break through the array of pesky ominous looking clouds. That didn’t stop Cubs pitcher Tsuyoshi Wada from throwing five strong innings, which was backed by Anthony Rizzo’s two-run homer that managed to push Chicago in front of San Francisco 2-0 by the time the rain started to fall. Headed into this series, the Giants weren’t quick to underestimate a team that crawling around the bottom of the NL Central with a 54-70 record, even though statistics showed they appeared to be an easy “I-just-got-my-bachelors-at-the-university-of-Phoenix” lay for the pennant hungry Giants. Players tried to hack it in the wet as it began to rain after 4½ innings, but when catcher Buster Posey popped up for the third out at the top of the fifth (making it an official game), the home plate umpire stopped play.

And now the folly: the Chicago grounds crew moseyed (yes, moseyed) onto the field and started to roll out the tarp on the already dewy area. Then, the tarp got stuck. And then, without warning, this grounds crew appeared perplexed on what to do. Yes, this grounds crew who should (and is mostly) experienced in dealing with the complexities around Chicago’s ever changing weather. Fans in the park started to chant “Pull!” as the workers attempted to tug at the immovable tarp over the uncovered infield. The amused chants then swiftly turned to boos as the crew pulled back the tarp in order to attempt to try to cover the infield again, which led those who were covering the Giants to start colorfully commentating on what was taking place:

But once the factious banter subsided, Giants were left wondering out loud “what the f**k, Chicago?” If the game is called, San Francisco would have to take the odd loss. Rule 4.12 (a)(3) in the baseball rule book states that a regulation game can only be suspended (meaning resumed at a later date) for only six reasons, one of which was clearly applied here: the failure or malfunction of a mechanical field device the home team controls. The argument here is that the failure to accurately cover the field is a human error, not a mechanical one. The Texas Rangers learned this the hard way as well on July 24th of this year when they faced the New York Yankees, in which the Rangers, down by one run, had to take the loss after the Yankee’s grounds crew couldn’t accurately put the tarp into place due to an extreme, and sudden, downpour.

Four hours later, after the field was deemed unplayable, it was announced that the game was officially “done,” meaning the Giants, like the Rangers, would take the loss.

Now, if this had been the very first time Giants had been caught in a juxtaposition regarding the Cubs and rain delays, there wouldn’t be a protest underway. Unfortunately, that’s not the case here. 15 years ago, lividness ensued in the Giants clubhouse when the Cubs postponed a game at home after an almost four hour rain delay… in which no rain fell in the first two hours. Akin to this time, the Giants were dead locked in a pennant race and had assumed that Chicago wanted to postpone the game to their advantage (they wished to put in Kevin Tapani). More shenanigans occurred recently when, during spring training earlier this year, when rain started pouring down on the new Cubs facility in Mesa, Arizona during an exhibition game between Chicago and San Francisco, the grounds crew had trouble pulling the tarp OFF the field, which resulted in a lovely little lake in the outfield. The game had to be cancelled.

It was clear to see that you could probably fry an egg on the heads of SF skipper Bruce Bochy and the always hilarious (and rather patient) Giants commentator Mike Krukow, who looked as if someone just insulted, then set on fire, his own mother.

The Giants are now 4½ behind the NL West leading Dodgers, but are still nestled in the second wild card position. To add insult to injury, while the camera was on both Kruk and announcer Jon Miller when the game was called at 1:16 a.m., you can actually see two members of the Cubs'”family” high-fiving the call on the field behind the commentators. Really? You were just accused (both subtlety and outright) of fixing a game my moving at a miniscule pace to cover the field during a sideways down pour, and you’re caught making a celebratory gesture on camera after the Cubs win is announced? Apparently, the Cubs have no clue what the word “tact” actually means, and should rightfully be heinously embarrassed, regardless if they swore up and down that they lobbied to get the game suspended.

The Giants have filed an official protest as of this morning.

I am never inviting these people to my house to hang picture frames. pic.twitter.com/3070hh2BCv

They sure know how to put it back into place … pic.twitter.com/7AZoJb3aCK