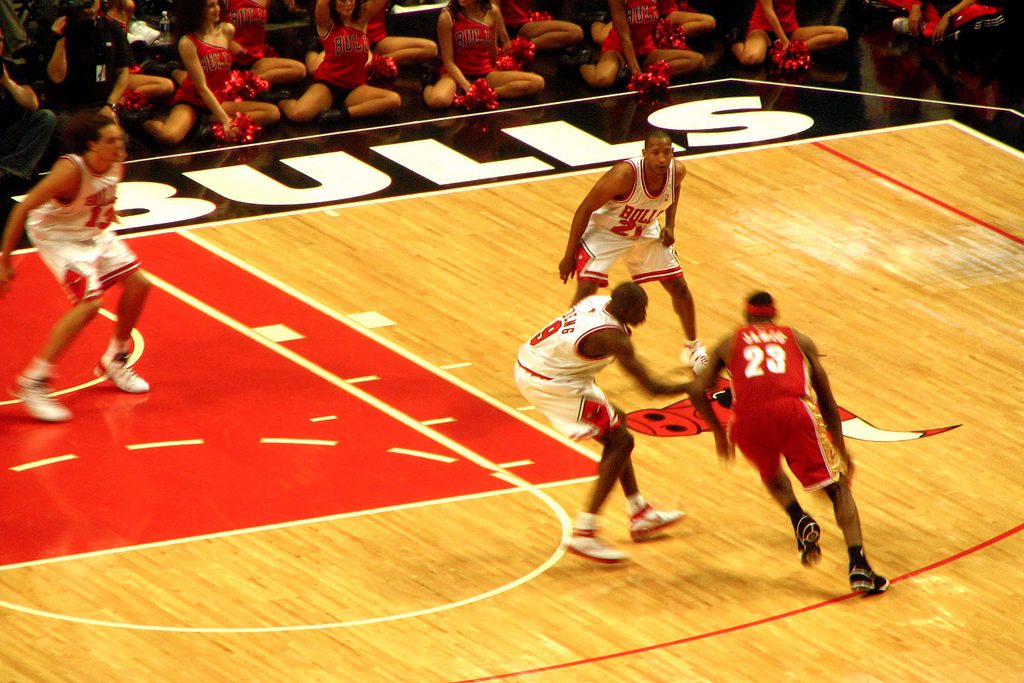 If there’s one match-up in the NBA Eastern Conference that everyone wants to see, it’s the Chicago Bulls vs. the Cleveland Cavaliers. The new big three on the Cavs is no joke with LeBron James, Kevin Love, and Kyrie Irving. On the other hand, the Bulls aren’t exactly a walk in the park since Derrick Rose is coming back to an amazing team that’s picked up Pau Gasol and has the 2013 NBA Defensive Player of the Year, Joakim Noah. This looks like it will be the heavyweight match of the year that will be sure to entertain basketball heads across the planet. So, let’s take a look at both teams shall we?

In one corner, you have King James taking back his throne in Cleveland, and with the tweaking of the roster the Cavs have a brand new bag that’s bigger and badder than ever. Without a doubt, James makes the Cavs tremendously better just by playing his game. The Cavs are going to be an offensive juggernaut of a squad that can easily get buckets due to their high-scoring All-Stars that also know how to dish the ball out. Love scored 26.2 points and dished out 4.4 dimes per game last season. His scoring average will most likely drop a tad, but he’ll definitely be an offensive threat with his solid shooting that consists of a variety of bucket busters, such as step-back jumpers, jump hooks, and post moves. Love is also one of the better passers in the four or five spot, making him even more dangerous in the post. Love and Irving will definitely be in the King’s court, meaning they’ll have the luxury of having many catch-and-shoot opportunities and easy lay-ups inside because of how good James’ court vision is. Everybody and their moms already know how ridiculously amazing James is on the offensive end, let alone the defensive end. He’s easily one of the best defenders in the league, but you know how shiny offense is; most people notice the bling of the buckets. Overall, the Cavs have the potential to rack up points by playing well-orchestrated team basketball. They’re a perfect foil to the defensive-minded Bulls.

Derrick Rose is back from the dead, again. This time, he’s probably coming back to the best Bulls team he’s been on, at least on paper. Pau Gasol may have some mileage on him, but he still has the skills to go for a ring. Run by all-defense-everything Tom Thibodeau, the Bulls boast an airtight, lockdown style that can drive opposing teams insane. Sure, Gasol is somewhat a liability on defense, but his length and basketball IQ will make up for that. Gasol and Noah will man the frontline and will more likely than not be the best big man duo the league has seen in a while. Not to mention, they have defensive bulldogs in Taj Gibson and Jimmy Butler that have the potential to give King James some problems. And then there’s Rose. There is no doubt that he will be rusty coming back, but he’s shown signs of his signature explosiveness and power that are stirring up the fans. Checking out the FIBA highlights, he’s looking pretty good out there so far.

The Bulls vs. Cavs is a prime time match up without a doubt. In order for the Cavs to be successful against the Bulls, the answer is still more or less this: have LeBron lock down Rose. It’s worked in the past more times than not because James is a big body that’s freakishly quick, and Rose is the heart of the Bulls. They would also benefit from Love backing down Gasol on the block and exposing the veteran’s age. Additionally, Irving, James, and Love can all utilize their abilities of creating their own shots and creating shots for others. When they warm up to each other and gel, the offense will come pouring in buckets.

In order for the Bulls to be successful against the Cavs, they need to share the ball well, and they have all the tools to do just that. They’ve added some dynamic offensive players like Gasol and Doug McDermott, that will blend well with Noah and Rose. Sharing the ball is key because it will potentially neutralize LeBron trying to lock down Rose. As far as defense goes, the Bulls just need to be themselves, which seems to work well. For the past five games against the Bulls, Love shot 42 percent from the field and 30 percent from the three-point line, which are a dip from his normal percentages. As mentioned before, Gibson and Butler can take turns chipping away at LeBron. Then there’s Kyrie Irving, who will be matched up against Rose. Seeing as Irving is starting over Rose on the USA basketball team, Rose will more than likely be driving to kill.

The offseason is filled with anticipation, especially for this match up. There’s nothing but speculation for now, but once these two teams step on the court, sparks should fly.