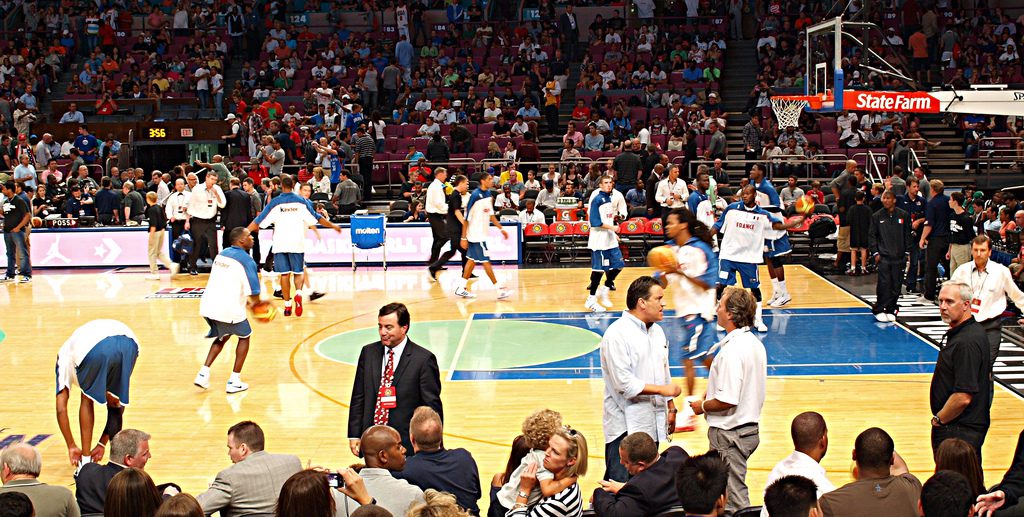 A Boris Diaw-led France squad defeated Spain, 65-52, in their FIBA World Cup quarterfinal game, leaving the entire basketball world with questions and observations. We’ve been led to believe, since before the tournament even started, there would be an inevitable showdown between Team USA and Spain. Regardless of who said what, I believe that many of us actually wanted that game. Now we have to wonder how we got here, what could have been, and what happens next?

How Did France do it?
The biggest takeaway from the FIBA World Cup to this point has to be the way France was able to beat Spain. France does have some quality talent, but much of that talent is missing from the roster this year. A fully-loaded France would be sporting a roster that would have the likes of Tony Parker, Joakim Noah, Nando De Colo, Kevin Seraphin, and Alexis Ajinca. Instead, they had to rely on Boris Diaw, Nicolas Batum, Mickael Gelabale, Evan Fournier, and a surprising Rudy Gobert. Gobert, currently on the Utah Jazz, finished the game with 5 points, 13 rebounds, and 1 block. His defensive play was a big reason why France was able to keep both Pau Gasol and Marc Gasol in check throughout the game. With Gobert and France shutting down the middle, France was able to control the pace of the game and ultimately score the upset with a dominant fourth quarter.

What happened to Spain?
This was supposed to be the year for Spain. Spain was the host nation. Led by the Gasol Brothers, Spain brought back the same veteran and experienced core group of players that gave both the 2012 and 2008 USA teams all they could handle during the Olympics. To some experts, Spain was actually going to be the favorite if and when they met Team USA in the championship game.

The skilled play of Pau and Marc Gasol combined with the athleticism of Serge Ibaka would give Spain a dynamic front court with size and skill. France made a concerted effort to shut down the paint and it worked. Collectively, nothing was going right for Spain. Pau Gasol finished with 17 points to lead Spain, but Marc and Ibaka combined to only score five points and grab six rebounds. That’s not going to get it done regardless of who you play. The inability of Spain to shoot the ball from the perimeter ultimately did them in, as they collectively shot 2-for-22 from the three-point line. France was able to sag off Ricky Rubio, Rudy Fernandez, and Juan Carlos Navarro time after time as Spain continued misfiring shots from the outside.

Spain is going to look back on this tournament as a failure for multiple reasons. The core group of Pau Gasol, Juan Carlos Navarro, and Felipe Reyes has only gotten older and may be past their prime. Both in 2008 and 2012 they came up short against Team USA rosters loaded with the top talent; this year they would’ve given Team USA an interesting game.

What does this mean for Team USA?
The end goal is still the same, prove you’re the best team in the world, but the road to do so looks a bit different than anticipated. In essence, the “inevitable” heavyweight matchup between Spain and Team USA actually gave Team USA something to look forward to. So much was written about the continuity of the Spanish team and how experienced they were in international play in comparison to a Team USA roster that seemingly lost player after player for one reason or another. The Gasol brothers and Serge Ibaka were supposed to be the frontcourt that would give Anthony Davis and Kenneth Faried fits. How would Derrick Rose, Kyrie Irving, Stephen Curry, and James Harden match up against Juan Carlos Navarro, Ricky Rubio, Rudy Fernandez, and Sergio Llull? All that has now gone by the wayside.

Team USA should definitely look at this game and take something from it. This isn’t the NBA Playoffs. The dynamic of a one-and-done tournament makes every game feel like a Game Seven. Every underdog has a chance to pull off an upset and every favorite has the chance to stumble. Look for Mike Krzyzewski to use this loss by Spain as an example of what can happen should Team USA look too far ahead.

Next Up?
Unfortunately France upsetting Spain, although it is a highlight, will ultimately leave us with questions of “what if?” Looking across international basketball, things are beginning to look a bit different. While France is seemingly on the road to becoming the next European basketball powerhouse, how long will their reign last? Tony Parker, Boris Diaw, and Joakim Noah aren’t exactly young either, so their window is already beginning to close. Could Canada be the team of the future? If Andrew Wiggins proves to be the real deal, a supporting cast of Tristan Thompson, Tyler Ennis, and Anthony Bennett could prove to be a real force.

Until the other day, the international field consistently had a team or two that you could point to as a test for the United States. Argentina, Brazil, Spain, Puerto Rico, and Greece all gave the United States good runs this past decade. That golden age may be a thing of the past. You’ll really have to question whether the gap between the United States and the rest of the world is shrinking or growing and whether that’s good or bad.