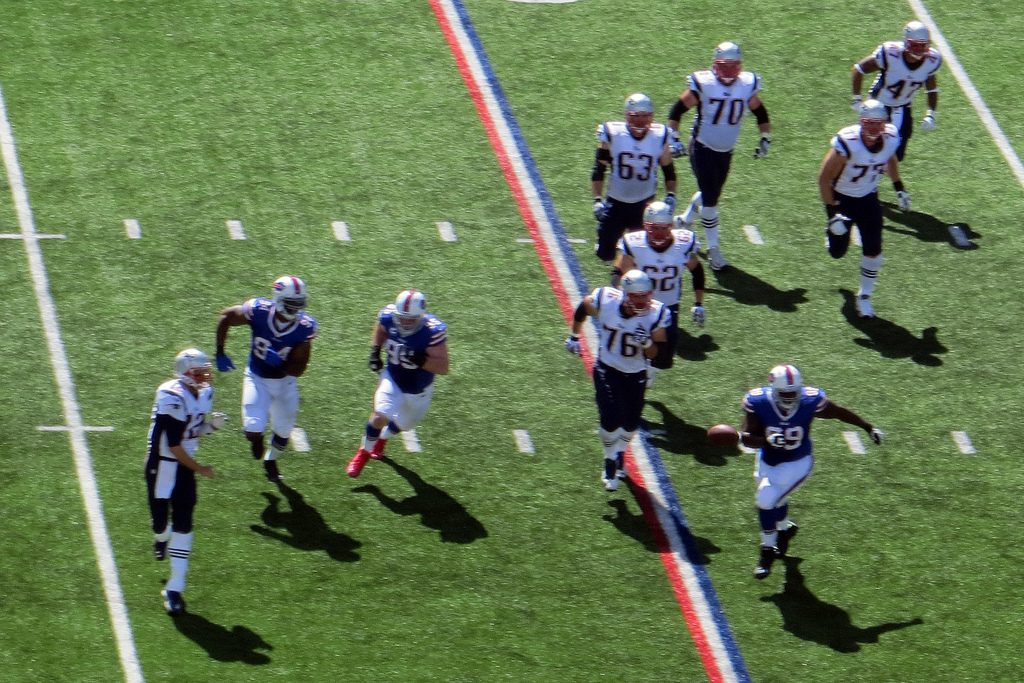 At the end of Week 2 there are seven undefeated teams left and at least three of them are probably in disbelief themselves. On the other end of the spectrum, there are a couple of teams who were expected to be contenders who find themselves winless. It is looking like the NFL will be full of off-field controversy and parity on the field.

Right now this division belongs to a team in blue not named the New England Patriots. The AFC East could end up being one of the more entertaining divisions in the league if all teams pull their weight.

Miami Dolphins (1-1): Miami may have still been flying high from their Week 1 win over New England because the Bills literally ran all over them.

New York Jets (1-1): In typical Jets fashion they almost won … kind of like how they will almost make the playoffs.

New England Patriots (1-1):  The Brady Bunch may have found their mojo against the Minnesota Vikings as they picked up their first win.

Basically, you have the Cincinnati Bengals and everyone else for the time being. Look for the Bengals to continue to separate themselves from their division rivals as the season progresses.

Cincinnati Bengals (2-0): Even without A.J. Green, Cincinnati still trounced the Atlanta Falcons. That’s how good they are and how bad the Falcons defense is.

Baltimore Ravens (1-1): Either the Pittsburgh Steelers are really bad or the Baltimore Ravens were sick of all the attention surrounding them that was not football related.

Pittsburgh Steelers (1-1): Looks like the Steelers are well on their way to that 8-8 season we talked about last week.

Cleveland Browns (1-1): The Browns beat the New Orleans Saints but the question remains: should we be impressed with their win or the Saints being 0-2?

This division is supposed to belong to the Indianapolis Colts but for the Houston Texans are doing a Texas two-step on everyone while the Colts look like that guy who got stuck slow dancing with the girl with headgear.

Houston Texans (2-0): Perhaps Houston QB Ryan Fitzpatrick just needed the comforts of a dome for us to realize how good he could be.

Tennessee Titans (1-1): Tennessee took an L versus the Dallas Cowboys because sometimes the Cowboys play well.

The biggest question is: are the San Diego Chargers going to make the Denver Broncos earn AFC West or not? Because they are the only team who can.

Denver Broncos (2-0): Denver only beat the Kansas City Chiefs by a touchdown, which probably means they were probably eyeing their rematch with the Seattle Seahawks.

San Diego Chargers (1-1): In a perfect world the Chargers would play like they did against the Seattle Seahawks every Sunday.

Kansas City Chiefs (0-2): There is a slight chance the Chiefs may not be as good as the Jacksonville Jaguars.

So far the Dallas Cowboys, Washington Redskins, and New York Giants have proved they shouldn’t pose much of a threat to the Philadelphia Eagles repeating as champs.

Philadelphia Eagles (2-0): One thing we know for sure about Philadelphia is they are never out of a game.

Dallas Cowboys (1-1): You want to celebrate the Dallas Cowboys beating the Titans but then you remember that is what they are supposed to do.

Washington Redskins (1-1): After scoring six points last week, Washington racked up 41 against the Jaguars but lost Robert Griffin III again. Good luck if you had him on your fantasy team.

New York Giants (0-2): Eli Manning and the G-Men lost to a very good Arizona Cardinals squad but the New York Football Giants are supposed to be a good team, too.

The NFC North still belongs to the Detroit Lions but the Chicago Bears showed they may have something to say about that in their win over the San Francisco 49ers.

Chicago Bears (1-1): Chicago did that thing they always do a few times a year where they win a game you don’t expect them to.

Minnesota Vikings (1-1): Surrounded by Adrian Peterson’s off-field troubles, Minnesota was ripe for the picking … and that is just what the Patriots did; pick them apart.

Detroit Lions (1-1): Remember when we said Detroit can be a really good team when they want to? Week 2 was not one of those weeks.

Green Bay Packers (1-1): Aaron Rodgers looked like himself against the Jets but that Green Bay defense is still trying to find itself, or maybe their identity is they’re bad.

The Carolina Panthers look good right now but this division is still up for grabs, as all the teams have some sort of deficiency.

Atlanta Falcons (1-1): Perhaps the Falcons were still watching Matt Bryant’s kick win the game for them in overtime last week against the Saints because the Bengals throttled them.

New Orleans Saints (0-2): The analysts say we should not worry about the Saints being winless but their defense is bad enough to at least place your finger on the panic button.

Tampa Bay Buccaneers (0-2): The good news for Lovie Smith’s team is New Orleans is winless too and the Falcons are inconsistent.

With the St. Louis Rams picking up a win and the Arizona Cardinals being undefeated, this division is once again looking like the toughest division in the NFL.

Arizona Cardinals (2-0): We have seen the Cardinals start the season undefeated before only to become an afterthought so let’s not get too excited yet.

Seattle Seahawks (1-1): There is a good chance, like the Broncos, the Seattle Seahawks may have been looking ahead to their rematch as well. The only difference was Denver actually won their game.

San Francisco 49ers (1-1): You want to say San Francisco was caught slipping but maybe their loss to the Bears is really who they are.